A Helping Hand for the Space Station
The International Space Station consists of parts made all over the world, and soon it will be getting a "big hand" from Canada. 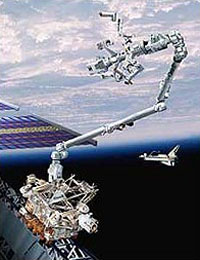 Canadarm2 was installed on the Space Station in 2001 on a mission of the Space Shuttle Endeavour.

Canada has long been the leading source for robot space appendages. The original Canadarm Remote Manipulator System, or "robot arm," is an important part of the Space Shuttle's equipment, useful for retrieving satellites and for building things in space.

The Canadarm's big brother, the Canadarm2, was installed on the Space Station in 2001 on a mission of the Space Shuttle Endeavour. This larger arm was designed to be one component in a three-part system to help build and service the ISS.

The second part of the system was added to the Station in June 2002. This part is essentially a "train" that can carry the Canadarm2 along rails running the length of the Station.

The final part, the "Canada Hand," is scheduled to launch in 2005. More than just a hand, "Dextre," as the Canadian Space Agency has dubbed the device, is a robot with two smaller arms. It is capable of handling the delicate assembly tasks currently performed by astronauts during space walks.

Its two arms will allow Dextre to transport objects, use tools, and install and remove equipment on the Space Station. It will be equipped with lights, video equipment, a tool platform and four tool holders. 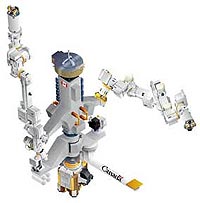 Dextre, as the Canadian Space Agency (CSA) has dubbed the device, is a robot with two smaller arms.

Dextre can be attached to the end of the Canadarm2 and placed in position for the work it needs to do. Or Dextre can ride on the rail system, and the Canadarm2 can be used to deliver equipment to it.

Astronauts will operate Dextre remotely from inside the Space Station. Mounted cameras will allow the ISS crew to remain inside the Station for tasks that previously would have required a space walk.

Dextre looks somewhat like the human body, with an upper body that can turn at the waist and shoulders that support arms on either side. Each arm has a "hand" that consists of parallel retractable jaws, which are used to grip objects.

In order to keep the arms from bumping into each other, only one arm can move at a time. This provides greater stability for the robot, because the hand not being used fastens onto the Station structure, anchoring Dextre in place.

Many astronauts have said that space walks are some of the more memorable parts of their spaceflight experiences. But with Dextre, the crew will have the option of staying inside while some of the work is done outside. And when they do go out, they'll have the benefit of the Canadian helping hand.

To read the full text of the article, visit:
http://nasaexplores.nasa.gov/show2_articlea.php?id=03-079