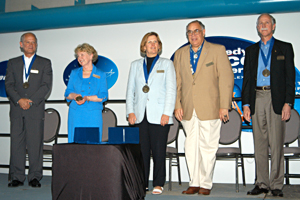 The five inductees all were members of the eighth class of NASA astronauts, selected by the agency in January 1978. They are: Frederick D. Gregory, Norman E. Thagard, the late Francis R. "Dick" Scobee, Kathryn D. Sullivan, and Richard O. Covey.

"Believe me, the selection was not an easy task," remarked host Jim Lovell, commander of the dramatic Apollo 13 mission and chairman of the Astronaut Scholarship Foundation, which supervises inductions. "So many exceptional people have flown on the Shuttle."

Currently serving as NASA's Deputy Administrator, Frederick Gregory is an accomplished Air Force pilot and veteran of three Space Shuttle flights. He served as a pilot during his first flight, STS-51B, in 1985. As commander of STS-33 in 1989, he became the first African-American to lead a U.S. space mission. He went on to command STS-44 in 1991. 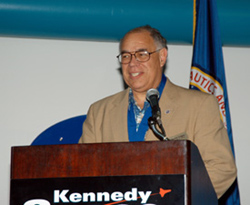 Image to right: Frederick Gregory speaks after his induction into the Astronaut Hall of Fame. Credit: NASA

As he accepted his induction, Gregory turned his thoughts to the future. "NASA's vision to head back to the Moon, then Mars and beyond, is a motivation and inspiration to encourage us to look beyond the status quo." 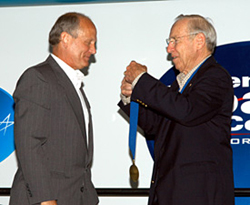 Dr. Norman Thagard pursued a degree in medicine when he returned from Vietnam, where he served as a pilot with the U.S. Marine Corps Reserve. He went on to fly as a mission specialist on four Space Shuttle missions: STS-7 in 1983, 51-B in 1985, STS-30 in 1989 and STS-42 in 1992. In 1995, Thagard spent 115 days in space as a crew member of Mir 18, making him the first American to launch aboard a Russian rocket and to occupy Russia's Mir space station.

"Norm plowed a lot of new ground to be the first from the U.S. to participate with Russia," said astronaut Robert Crippen, who introduced Thagard. "And like the professional he is, he pulled it off in style." 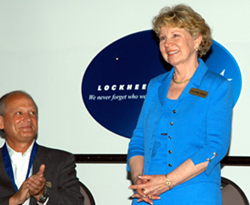 Dick Scobee piloted mission STS 41-C in 1984. On Jan. 28, 1986, he was serving as commander of mission STS-51L when Space Shuttle Challenger and the crew were lost one minute and 13 seconds after launch. Scobee was honored by educator astronaut Barbara Morgan, who served as a backup crew member on the Challenger flight. Morgan warmly recalled Scobee's courage and friendliness.

June Scobee Rodgers accepted the induction on her late husband's behalf. "So many times, he's been remembered for how he died. Thank you for remembering how he lived." 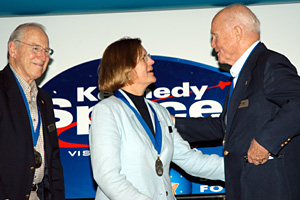 Dr. Kathryn Sullivan served as a mission specialist in 1984 on mission STS-41G, successfully conducting an extravehicular activity (EVA), or spacewalk, to demonstrate that it was possible to refuel an orbiting satellite. The feat made her the first U.S. woman to walk in space. She served as a mission specialist on STS-31 in 1990, the mission to deploy the Hubble Space Telescope, and was payload commander on STS-45 in 1992. Dr. Sullivan is currently the Chief Executive Officer of the Center of Science and Industry (COSI) in Columbus, Ohio.

"Kathy has maintained a lifelong commitment to education," remarked astronaut and fellow Ohio native John Glenn as he spoke of her work at COSI. "She is truly a scientist, first-class." 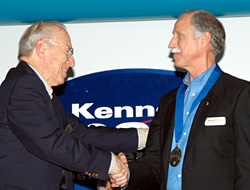 Dick Covey served as pilot on his first mission, STS 51-I, in 1985. He also piloted Shuttle Discovery on STS-26 in 1988, NASA's return to flight after the Challenger accident. Covey later commanded STS-38 in 1990, and STS-61, the Hubble Repair Mission, in 1993. Following the Columbia accident, Covey was chosen by NASA to co-chair the Return To Flight Task Group.

"It's with great pride that I find myself among the distinguished group who are members of the Astronaut Hall of Fame," Covey said. "It's humbling to be part of that group."

At the conclusion of each presentation, Lovell placed a medal around the neck of each new inductee.