Hamming it Up on the ISS
Amateur radio, also called ham radio, has become a fun way for average folks to communicate with International Space Station astronauts. Anyone with a scanner can listen to the communications that take place between Earth and space, and if you have a transmitter, you can take part in the conversations.

Amateur Radio On The International Space Station (ARISS) is a program that offers an opportunity for students to experience the excitement of Amateur Radio by talking directly with crew members of the ISS. 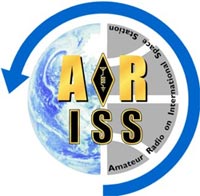 "The important things to know are when the Space Station will be over your location, what frequency the astronauts transmit on, and what the crew's schedule is," Dumbacher says. "It doesn't matter if the ISS is passing overhead during daylight hours because you don't need to see the craft. The important thing is to take advantage of the small window of opportunity you have to communicate with them. The ISS is overhead for only about 10 minutes at a time in any given area, so you have to be on the ball."

While individuals can monitor Space Station transmissions from home, school groups can make it a class project and work closely with ham radio operators and NASA staff members to schedule a conversation with the astronauts. The ARISS project was started with that goal in mind: classes of students interacting directly with astronauts through ham radio linkups.

Making sure a school is ready to communicate with the ISS can be a challenge. There is a 10-minute window for communication and it's important to make sure the students and equipment are prepared when the Station passes overhead. 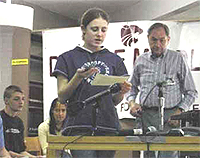 Image to right: Students at DuBose Middle School, Summerville, South Carolina had a successful contact with Mike Foale on board the ISS via amateur radio. Credit: ARISS

It's a living example of why mathematics and science are important. "It shows practical use of formulas," Dumbacher says. "Students learn about complex ideas like Doppler Shift and trajectory paths. It shows that even addition and subtraction get you to important points. Science matters. Without science, we wouldn't have the ISS, we wouldn't understand weather and we wouldn't understand basic functions of everyday life. And there's no better way to learn it than by doing it."

If you get the opportunity to make contact with Shuttle or Space Station astronauts, Dumbacher has one bit of advice. "Be sure to get a QSL card. That's a card NASA will send you, proving that you talked to an astronaut. There's information about getting it on the ARISS Web site. You'll want to be able to put that up on your bulletin board and tell everyone."

Visit http://spaceflight.nasa.gov/station/reference/radio/ to learn more about ham radio on the International Space Station.

Visit http://www.rac.ca/ariss/ to learn more about the Amateur Radio On The International Space Station Program.

To read the full text of the article, visit:
http://nasaexplores.nasa.gov/show2_articlea.php?id=01-018