Fire Prevention in Space
If a fire were to break out on a spacecraft in orbit, astronauts would fight the flames in slightly different ways than they would on Earth. Fires in space are not the same as fires on Earth, but the best way to fight any fire is to keep it from starting.

As hot gasses from a flame rise, they create air currents that bring fresh air to the fire. This buoyancy is what makes a flame long and pointed here on Earth. In low gravity situations, there is no buoyancy from flames. 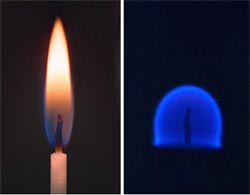 Image to Right: On Earth, a candle burns with a tall, yellow flame. In space, a smaller, blue flame burns on the center of the wick. Credit: NASA

Convection, the movement of air, is an important way that heat is transferred to other spaces. Without air, fires don't spread as rapidly. Ventilation fans on the Space Station replace natural convection and can supply the air a fire needs to burn. Under these circumstances, the fire can spread in any direction, rather than just upward.

The flame's unusual shape creates different amounts of soot, smoke or harmful gases. "Combustion in microgravity is a very difficult problem, and there are a lot of engineers and scientists working to understand it better," said Gary A. Ruff, aerospace engineer at Glenn Research Center's Microgravity Combustion Science Branch in Cleveland, Ohio.

All materials going up into space are tested for flammability on Earth in a special test chamber and ignited with a hot wire. Some items are so important to a mission's success that they're permitted to travel to space despite being flammable.

Detecting a fire in space is also different than on Earth. Here, smoke detectors are installed on the ceiling or upper section of a wall because that's the direction in which smoke travels. In space, smoke doesn't rise, so detectors on International Space Station are placed within the ventilation system.

Image to Right: Russian modules on the ISS use a water-based foam fire extinguisher, while the other modules feature carbon dioxide (CO2) units. Credit: NASA

While the ISS hasn't experienced a fire, a significant blaze did take place in 1997 on the Russian Space Station Mir. The fire came from an oxygen generator, where the oxygen supplied a ready source of fuel. Tests showed that the generator had to run out of oxygen for the fire to burn out. If a fire were to occur on the ISS, the astronauts would become firemen and follow a three-step response system.

First, they would turn off the ventilation system to slow the spread of fire. Next they would shut off power to the effected unit. Finally astronauts would use fire extinguishers to put out the flames.

Ruff says that while safeguards have been in place to prevent a fire from occurring on the Space Station, it's comforting to know that astronauts could respond to an emergency because they've prepared for any eventuality.

To read the full text of the article, visit:
http://nasaexplores.nasa.gov/show2_articlea.php?id=01-064