Docking With Precision
The skills astronauts need to dock the Space Shuttle with the International Space Station (ISS) may be more familiar to school students than adults.

The training simulator astronauts use to learn docking skills is found in many American homes; a video game console. However, the program used by astronauts is more sophisticated and complex than a game you might play at home, but the skills it requires are quite similar. 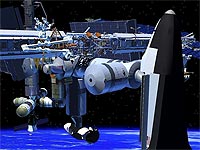 Image to right: When the Space Shuttle docks to the International Space Station, people and supplies can flow freely back and forth. Credit: NASA

Just as countless children have assured their doubting parents, hand-eye coordination, transferring mental images to a monitor screen, following the proper maneuver sequences with team members, and the ability to track several functions simultaneously actually do have real-life payoffs.

However, docking the Shuttle with the ISS is no game. If an astronaut makes a mistake, there's no reset button to start the process again. When Space Shuttle pilots dock their craft to the ISS, their accuracy has to be precise, within 3 inches. When you're guiding a 200,000-pound object moving at more than 17,000 miles per hour toward a seven-story structure orbiting 220 miles above the Earth, 3 inches leaves no room for mistakes. 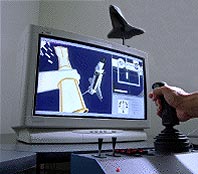 Image to left: The program used to simulate docking procedures is quite similar to commercial video games. Credit: NASA

As the Shuttle pilot slowly closes in on the ISS docking target, the crewmember in charge of rendezvous systems reads off a checklist of actions to take and instruments to monitor, in the proper sequence. Crew members use a laser gun to track the vehicles' speeds. Information from the laser feeds into a computer to fine-tune final calculations.

As the Shuttle moves within 1,000 feet of the ISS, the commander looks out the rear of the Shuttle's back windows and eases the Shuttle to a point just above the ISS's docking ring. The commander then turns the Shuttle so that it approaches the docking ring upside down and tail first. The shuttle slows down even more and glides into its designated docking grooves.

Image to right: The docking ring is where the Shuttle latches to the Space Station. Credit: NASA

It sounds simple enough, especially to video gamers who handle mock maneuvers all the time. However, in reality, the importance of success matters much more. It's a complicated process, but practice on the simulators and classroom education on scientific principles at work help astronauts approach the maneuver with confidence.

So, the next time someone asks you if playing video games has any value at all, remind that person that astronauts are required to practice on their simulators to keep their skills honed. And if it's good enough for an astronaut, it's good enough for us on Earth, too. Just remember that astronauts do everything in balance and moderation; they don't spend so much time at the joystick that they neglect their other responsibilities.

To read the full text of the article, visit:
http://nasaexplores.nasa.gov/show2_articlea.php?id=02-036
NASAexplores and NASA's John F. Kennedy Space Center
› Back To Top