Windows on the Universe 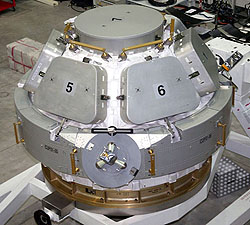 Bound for the International Space Station early in 2009, the Cupola module was delivered to the Space Station Processing Facility at Kennedy Space Center, Florida. It was shipped from Alenia Spazio in Turin, Italy, by the European Space Agency.

Image Left: Cupola is a pressurized Space Station Element with seven windows. The windows have covers for protection from space debris. Click on image for larger view. Image credit: NASA

The Cupola will provide unprecedented views of activities outside the Station and spectacular views of the Earth. Cupola has the capability for command and control workstations to be installed to assist in Space Station Remote Manipulator System (SSRMS) and Extra Vehicular Activities (EVA). 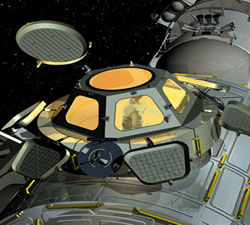 Cupola will be launched on Station assembly mission 14A (STS 133) and then be mated to the Forward Port of Node 3. The Robotic Workstation (RWS) used to control the SSRMS will be installed inside the Cupola.

Image Right: Crew members of the ISS will have a 360-degree panorama thanks to the addition of the module. Cupola is the final element of the Space Station core. Click on image for larger view. Image credit: NASA

KSC and the ESA will conduct a joint inspection leading to the turnover of the Cupola to NASA. After some testing and window inspections, the Cupola will be put back in its transportation container and stored at KSC until it is needed for launch processing and preparation.