Cape Crusaders are Shuttle Crew's Eyes and Ears
Behind every Shuttle crew, there is a team of five to eight astronauts who serve as the crew's point of contact between NASA-Johnson Space Center (JSC) in Houston, Texas and NASA-Kennedy Space Center (KSC) on the Florida coast. These astronauts are the eyes and ears to the Shuttle vehicle.

They are the Astronaut Support Personnel (ASP). But because of their frequent trips to NASA-KSC, they're better known as the Cape Crusaders. 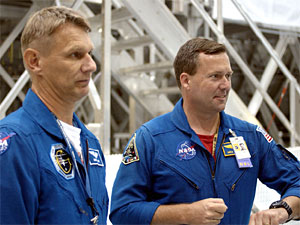 Astronaut Mike Foreman compares being a Cape Crusader to life in a military squadron. "You're assigned to a squadron, and you have an office where you do your ground job. Outside there's a hangar, and you can just go downstairs to the hangar and go fly. Well, for the astronauts, the hangar is in Florida, and our offices are in Texas."

Cape Crusaders come to NASA-KSC 25-35 times during a year of normal flight operations. For each mission, they are present for a full-dress countdown rehearsal called the Terminal Countdown Demonstration Test, launch, and landing. They often make at least one other trip during the time leading up to a mission. A typical stay lasts one to four nights, especially during the case of a 24-hour launch delay.

Their duties include setting the Shuttle orbiter's cockpit switches to the appropriate settings, participating in communication checks between the orbiter and the ground, strapping in the flight crew for launch, and assisting with landing operations.

According to Foreman, the only down side is the frequent travel and separation from family. "But luckily, they're short trips - nothing compared to a long military deployment, and the people at KSC are great. It only takes an hour and a half to get to KSC in the T-38 jets NASA provides." 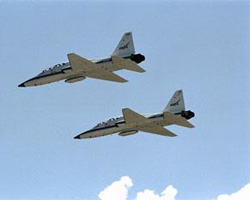 The Cape Crusaders are based at NASA-JSC and managed by the Astronaut Office. Astronauts who are not currently training for an upcoming flight have technical assignments, and some participate in the Cape Crusader rotation.

Astronauts travel between NASA-JSC and NASA-KSC in T-38 jets. The jets can make the trip in about an hour and a half.

After working a few missions as a Cape Crusader, astronauts are qualified to serve as Prime ASP, the lead position for a particular mission. As a member of the launch pad closeout crew, the Prime ASP helps the flight crew into their seats and is one of the last people to see them before launch.

Astronaut Lee Archambault will be the Prime ASP for STS-114, the Return to Flight mission.

Right now, as NASA focuses on safely returning the Shuttles to flight, the astronauts are spending their time in training for upcoming missions or working on their technical assignments.

Foreman is part of the Orbiter Return to Flight Working Group, which reviews Shuttle orbiter issues needing resolution. He and fellow Cape Crusader Alan Poindexter are also in training for their first space flight, STS-120.

As STS-114 approaches, ASP activity will pick up once again.

"Other than being on an actual flight crew, it's the best astronaut job to have," said Foreman. "You get to touch the hardware and interface with the folks at KSC. Being a Cape Crusader is the ultimate of all astronaut ground jobs."