Special Blankets Shield the Shuttle from Heat
When we think about blankets, we see them as protection from cold temperatures. But for the Space Shuttle orbiter, blankets mean protection from intense heat.

Reinforced Carbon-Carbon (RCC), insulative tiles, and special blankets make up the Thermal Protection System (TPS) that protects the orbiter from the extreme temperatures encountered during spaceflight. Made of a woven ceramic fabric with insulative batting between the fabric layers, they can be as large as 30 inches square and vary in thickness from 1/4 inch to 2 inches. Each set of blankets has a very specific purpose. 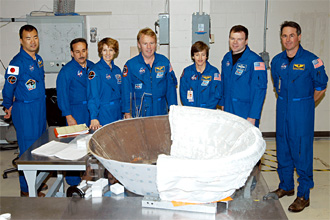 For example, the nose cap endures some of the highest temperatures the orbiter encounters, which occur during re-entry through Earth's atmosphere. Made of RCC, the cap can withstand temperatures up to 3,000 degrees Fahrenheit, but RCC isn't much of an insulator. So, the heat that radiates into the cap's hollow inner cavity has to be absorbed somehow. That's the blankets' job.

Image to left: The STS-114 crew gathers around the work stand holding the insert for Discovery's nose cap. Credit: NASA/KSC

Protecting several payloads and a spacecraft is a tall order, and making and installing the nose cap blankets is an intricate and demanding job. For Shuttle Discovery, currently being prepared for Return to Flight mission STS-114, the entire process took place at NASA's Kennedy Space Center in Florida. 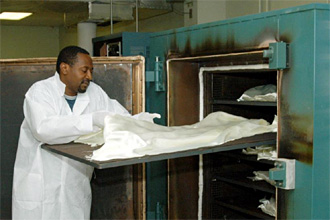 "This is only the second time we've manufactured them here at Kennedy Space Center," said Pearl Richardson, who works in quality control for United Space Alliance (USA), NASA's prime Shuttle contractor. "But this is the first time we've done it all from scratch, manufacturing the blankets and installing them."

Image to right: Damon Petty, with United Space Alliance, prepares the cover of an insulation blanket in the oven prior to heat cleaning.
Credit: NASA/KSC

Formerly manufactured in California, now the blankets are made by USA's softgoods team in KSC's Thermal Protection System Facility, where the Shuttle's heat-resistant tiles are manufactured.

"Inside the nose cap, there are four quadrants of blankets that form a conical shape," explained TPS mechanic Janet Mills. "Each quadrant carries seven blankets, and then in-between each quadrant is an additional blanket. So there are 32 blankets total."

Patterns or templates help the team know where to cut the blanket material to the proper measurements. Once the pieces are cut, layers of fabric are sandwiched together with a high temperature batting to create a blanket piece.

From a designated starting point, the blankets are stitched into a roughly 3-by-4-inch grid, trimmed to the exact measurements of the nose cap's inner support structure, sewn closed around the edges and then sent for heat-cleaning and waterproofing.

When you clean a blanket at home, it's usually as easy as tossing it into the washing machine. But the fabric in TPS blankets is coated with sizing, a substance that acts as a lubricant, to keep the fibers from coming apart when the fabric is woven. Using heat is the most effective way to remove the sizing without damaging the fibers in the fabric. The blankets are baked on racks in large ovens similar to pizza ovens.

"Baking is a two step process," said Lee Zook, softgoods production manager. "The blankets are heated to 600 degrees Fahrenheit for several hours, then to 850 degrees to complete the cycle."

During the next step of the process, every inch of the blankets becomes waterproof. Next, an identification number is written onto each piece using a special gold pen. They are then packed and delivered to the nearby Orbiter Processing Facility, where the Shuttle orbiter and its nose cap await.

Blankets are not packed in against the nose cap's interior. Instead, they almost take the shape of a bowl, with a 19-inch open space between blankets and the widest point of the RCC. Smaller blankets, nicknamed "puzzle blankets," fill the remaining space and further protect the bulkhead. When the nose cap is completed and inspected for quality control, it's ready to be installed on the orbiter. 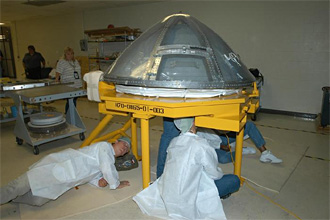 Image to left: Discovery's nose cap rests on a work stand while technicians peer inside to check the placement of thermal blankets. Credit: NASA/KSC

It takes two painstaking months for the team to transform individual pieces of ceramic fabric into space-age insulating blankets. But when Discovery thunders skyward on STS-114, each team member will have the satisfaction of knowing the blankets will help to protect the Shuttle from the intense heat and harsh cold it will face in orbit.