A Conversation with Astronaut Andy Thomas 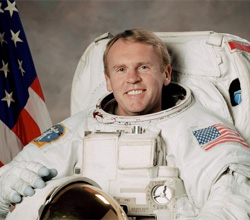 NASA astronaut Andy Thomas is preparing for what may be the most important Space Shuttle flight in NASA's history. 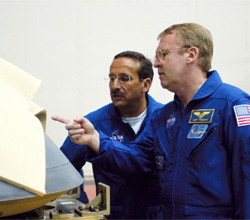 "We have a lot of requirements on this flight that no other flight has had to deal with," Thomas said. "There are new procedures for doing inspections, for doing repair, for evaluating the integrity of the vehicle. We're going to be the first people to ever do those, and that's a new task."

However, Thomas can see beyond the Shuttle's safe return to flight. He spoke with enthusiasm about the recent success of NASA's Mars Exploration Rovers and how their mission fits into the new, broad plan for human space flight set forth by President George W. Bush. 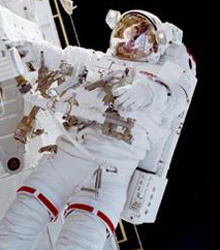 "I think, ultimately, the answer for exploration is a balance between human exploration and robotic exploration, using the robotic probes as the pathfinders to lay the groundwork to help define where people should go," Thomas explained. "And then ultimately, I think you do want people to do the exploration, because there are tasks that you will need people for and you need people able to make real-time decisions if we're going to do this exploration."

Thomas made his first space flight on STS-77 in 1996. He went on to spend 141 days in Earth orbit on Russia's Mir Space Station in 1998. In 2001, he performed a six-and-a-half hour spacewalk during STS-102, installing components to the exterior of the International Space Station.

Astronaut Andy Thomas works in the cargo bay of the Space Shuttle Discovery during STS-102, while the spacecraft was docked with the International Space Station (ISS).

Today, though, Thomas's attention is focused on STS-114.

"This, of course, is undeniably a very important flight, perhaps the most important Shuttle flight since Challenger," Thomas said. "It's a great thrill to be a part of the team that's supporting Return to Flight and to do the mission. It's just going to be exciting."