The man in the leather jacket seems very calm, even as everyone else on the movie set scrambles to try the shot again. 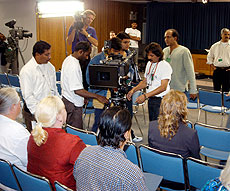 Gowariker is directing at Launch Pad 39A, where a strong wind blows in from the Atlantic, making life difficult for the hair and makeup crew. Dozens of important looking people with clipboards and headsets run around making sure everything's just right and that Shahrukh Khan, the film's lead actor and one of India's biggest stars, has plenty of water and shade as the Florida summer kicks in.

An Academy Award nomination in 2002 helped Gowariker garner a great reputation in India and a big budget for "Swades." But he didn't opt to make an action thriller or a Roman epic.

"This, in a nutshell, is about a man who rediscovers his roots," says Gowariker, who is directing and producing the film, which he also wrote. "He takes his country for granted, and gives up on his country. He then realizes: to solve a problem, he has to make an attempt first."

In the film, an engineer played by Khan leaves his home in India and comes to the United States to work for NASA. But why NASA? 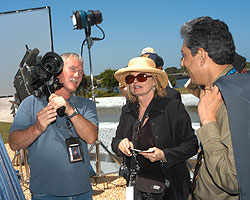 "NASA stands for the highest level of technological exploration, and everything modern," explains Gowariker. "I wanted to juxtapose that level of technology and innovation, as opposed to the very fundamental and basic life that we [in India] are leading."

The main character in the story works on a rainfall monitoring satellite known as the Global Precipitation Measurement (GPM). GPM is an actual NASA mission, currently scheduled to launch in 2007.

In the movie, spacecraft is lifted into orbit aboard a Space Shuttle; NASA's real orbiter fleet is scheduled to return to flight in March 2005, when Discovery carries Commander Eileen Collins and her crew on STS-114.

Residents of Bangalore, Bohpal and Bhubaneshwar can look for "Swades" to open in an Indian multiplex near them this August.
Matthew Cavagnaro
NASA's John F. Kennedy Space Center
› Back To Top