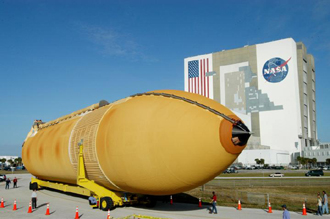 The External Tank that will hold the propellants for the Space Shuttle's Return to Flight mission has reached its final Earthly destination: NASA's Kennedy Space Center in Florida.

NASA and Lockheed Martin Corp. spent nearly two years upgrading the tank to make it safer for liftoff. The arrival of the 15-story, bronze-colored tank marks an exciting milestone in NASA's Return to Flight efforts. It will help safely launch the orbiter Discovery and a seven-member crew to the International Space Station on mission STS-114, targeted for a launch opportunity beginning in May.

"This will be the safest tank we've ever flown, no doubt about it," said Space Shuttle Program Manager Bill Parsons, who celebrated his birthday by watching the tank's arrival.

Among dozens of changes is a redesigned forward attach fitting, where the Space Shuttle orbiter connects to the tank. The new design satisfies the Columbia Accident Investigation Board's recommendation to reduce the risk to the orbiters from falling debris during the climb to space. 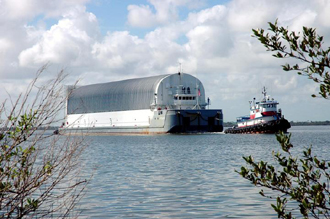 The External Tank departed from the Michoud Assembly Facility in New Orleans on Dec. 31, embarking on a roughly 900-mile voyage to Florida aboard a specially designed barge called Pegasus. The Solid Rocket Booster retrieval ship Liberty Star towed the barge from Michoud to Port Canaveral early Jan. 5. Tugboats brought it through the port and up to the Launch Complex 39 Turn Basin.

Image to right: A tugboat tows the barge carrying the External Tank to the dock at the Launch Complex 39 Area Turn Basin. Credit: NASA

The tank stayed aboard Pegasus overnight and finally rolled out onto Kennedy soil as planned at 9 a.m. Jan. 6. A crowd of eager spectators -- media representatives, NASA and contractor executives and dozens of employees -- gathered to watch the bulky tank emerge from the barge and begin its 30-minute trek to the neighboring Vehicle Assembly Building (VAB). 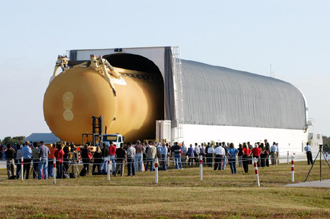 Image to left: Media view the newly redesigned External Tank as it is off-loaded from the barge that carried it from the Michoud Assembly Facility in New Orleans. Image: NASA

In the VAB's 50-story transfer aisle, the tank will be lifted vertically and placed into a "checkout cell," where it will begin final preparations for launch. Finally, it will be mated to the twin Solid Rocket Boosters. Later, Discovery will be attached to the tank and the entire assembly will make the trek to the launch pad.

Kennedy Space Center Director James Kennedy emphasized that the tank's arrival has a profound impact on NASA's Vision for Space Exploration. The Space Shuttle's Return to Flight is the first step in the Agency's vision to travel to the Moon, Mars and beyond.
Anna Heiney
NASA's John F. Kennedy Space Center
› Back To Top