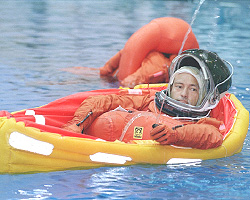 Image right: NASA Astronaut Carlos I. Noriega will be a mission specialist on STS-121.

STS-121 is International Space Station Flight Utilization and Logistics Flight 1.1 (ULF1.1). Discovery will deliver supplies and equipment to the orbital outpost. It will be the first mission to fly following STS-114, which will return the Space Shuttle to flight following the loss of Space Shuttle Columbia and the STS-107 crew.

Some of STS-121's objectives were originally scheduled for STS-114, but were reassigned when STS-114 received Return to Flight activities. The STS-121 crew will also continue the testing and development of new hardware and procedures designed to make Space Shuttle flight safer.

Other STS-121 crewmembers will be added at a later date. This mission could serve as an ISS crew rotation flight, which means new Station residents will travel to the Station aboard the Shuttle, and the Expedition crew aboard will return to Earth with STS-121.

Lindsey, a colonel in the U.S. Air Force, will serve as commander for the second time during his NASA career. He commanded STS-104, a mission that delivered the Quest Airlock to the Station in 2001. He served as a pilot during his other two flights -- STS-87 in 1997 and STS-95 in 1998. 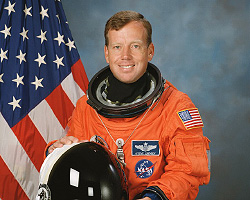 Kelly will make his second trip into space during STS-121. He will serve as the mission's pilot. He was the pilot for STS-108 in December 2001. STS-108 delivered the Expedition 4 crew to the International Space Station and returned the Expedition 3 crew to Earth. Kelly is a commander in the U.S. Navy.

Like Lindsey and Kelly, STS-121 Mission Specialist Carlos Noriega will make his second trip to the International Space Station. Noriega, who is a retired U.S. Marine Corps lieutenant colonel, served as a mission specialist during STS-97 in 2000. He conducted three STS-97 spacewalks to install and activate the Station's P6 Integrated Truss Segment. In 1997, he flew to the Russian Mir Space Station as a mission specialist during STS-84.

Fossum, a lieutenant colonel in the U.S. Air Force Reserves, is a member of the 1998 astronaut class. Before joining the astronaut corps, Fossum worked for NASA as an engineer. He will serve as a mission specialist for STS-121. Fossum is a 1980 graduate of Texas A&M University.

STS-114 is scheduled to launch no earlier than Sept. 12, 2004. STS-121 is slated to lift off no earlier than November 2004. The STS-121 crewmembers began their training this month at Johnson Space Center in Houston, Texas.