Two Plus One Makes History
What do two Space Shuttle Solid Rocket Boosters plus one External Tank equal?

Together, the fuel in the boosters and tank can generate 6.5 million pounds of thrust -- enough to power Space Shuttle Discovery on its Return to Flight mission to the International Space Station in the May-June time frame. 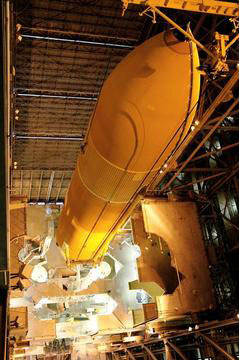 Image to Left: Suspended high inside the Vehicle Assembly Building, the External Tank (ET) designated for the Return to Flight mission STS-114 is being lowered toward the Mobile Launcher Platform and twin Solid Rocket Boosters (SRBs) seen below. Among dozens of changes is a redesigned forward bipod fitting to reduce the risk to the Space Shuttle from falling debris during ascent. Credit: NASA

On Feb. 28, NASA successfully "mated" the redesigned External Tank and twin Solid Rocket Boosters (SRBs) at NASA's Kennedy Space Center, marking a milestone in returning the Space Shuttle safely to flight. Mating the tank with the boosters is a major step in assembling the Shuttle system for launch.

The External Tank was lifted by a giant crane and joined to the already assembled, or "stacked," boosters in the 52-story Vehicle Assembly Building (VAB) at Kennedy.

Following integration and final checkout of the External Tank with the SRBs, orbiter Discovery will roll over from the Orbiter Processing Facility in mid-March to mark the completion of Return to Flight processing. The orbiter then will be attached to the stack in the VAB.

The External Tank will fly with several modifications, including two new forward bipod heaters at the forward attach fittings that connect the tank to the orbiter at the Space Shuttle's two forward attachment struts. NASA and Lockheed Martin Space Systems Co. spent nearly two years modifying the tank to make it safer. 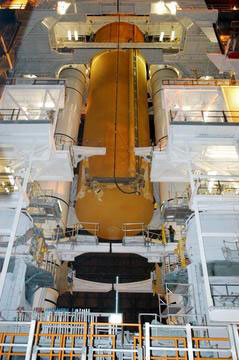 Image to Right: The External Tank (ET) is carefully lowered between the Solid Rocket Boosters (SRBs) so that it can be mated to the SRBs for launch. The next step will be to attach the orbiter Discovery to the stack after it is moved from the Orbiter Processing Facility to the VAB in mid-March. Credit: NASA

During ET-SRB mating, the left and right boosters are bolted to the tank at both the forward, or top, and the aft, or tail ends. At the forward end, a vertical bolt mechanism attaches each booster to the tank. On launch day, approximately two minutes after liftoff, the SRB separation from the ET begins when pyrotechnic devices fire to break the 25-inch, 62-pound steel bolts. One half of the bolt is caught in canister-like "bolt catchers" located on the tank; the other half remains with the boosters.

The External Tank is the largest element of the Shuttle system, which also includes the orbiter, main engines and SRBs. At 27.6 feet wide and 154 feet tall, the tank holds a combined volume of 73,000 cubic feet of fuel -- enough liquid hydrogen and liquid oxygen to fill about six 1,600-square-foot homes. The fuel is used to power the Space Shuttle's three main engines, which provide 1.2 million pounds of thrust at sea level. 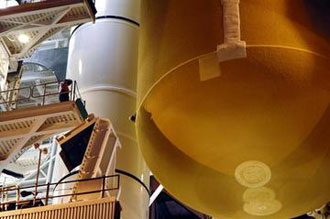 Image to Left: Inside the Vehicle Assembly Building, a technician (left, center) watches the progress of the External Tank as it is lowered between the Solid Rocket Boosters (SRBs) on the Mobile Launcher Platform. STS-114 is scheduled to launch during a window extending May 15 to June 3 and will carry supplies and equipment to the International Space Station. Credit: NASA

Add the Shuttle's twin Solid Rocket Boosters, the largest solid fuel rockets ever designed, and you've got even more power. At 149 feet high and 12 feet in diameter, each booster produces 2.65 million pounds of thrust at liftoff and burns about 4.5 tons of fuel per second. Sound like a lot? Well, it equals about 40 million horsepower, or the same energy as 14,700 diesel locomotives speeding on the same track.

Kennedy's VAB, where the towering rockets and fuel tank are mated, is one of the world's largest buildings, covering eight acres and standing nearly twice the height of the Statue of Liberty.