During STS-89, the Space Shuttle Orbiter Endeavour will conduct the eighth of nine dockings of a U.S. spacecraft with the Russian Mir space station. This is Endeavour's first docking mission. After docking is completed, Andrew S. W. Thomas, the seventh and last U.S. astronaut to live and work aboard the Russian space platform, will transfer from Endeavour to become a member of the Mir 24 crew for approximately four months. Thomas will replace Dr. David A. Wolf, who boarded Mir during the STS-86 mission in September. Wolf will return to Earth aboard Endeavour.

The nine-day mission will begin when Endeavour lifts off from Launch Pad 39A on its 12th space flight during a 5- to 10-minute launch window and enters an orbit of 160 nautical miles and an inclination of 51.6 degrees to the Earth's equator. The orbiter will then rendezvous with Mir at an altitude of 213 nautical miles and dock on Flight Day 3.

In addition to the crew transfer during docking operations, the seven-member crew will move tons of science and logistical materials as well as supplies between the two spacecraft, including water from the orbiter's fuel cells for use on Mir. Science investigations that are concerned with crew health and safety aboard Mir and technical applications for the International Space Station will be also conducted during this time.

When docking operations are complete, Endeavour will undock on Flight Day 8 and prepare for its return to Earth. Weather permitting, the orbiter will touch down at KSC's Shuttle Landing Facility to conclude the 89th Space Shuttle mission. 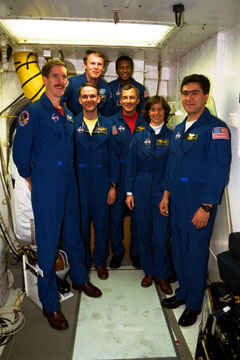 One Russian cosmonaut and six American astronauts will make up the STS-89 crew. Three crew members have previously flown in space.

The STS-89 pilot is Joe Frank Edwards Jr. (Cmdr., USN), who is on his first space flight. The Navy fighter pilot and project flight test officer was selected as an astronaut candidate in 1994.

Five mission specialists round out the crew. Andrew S. W. Thomas (Ph.D.) flew before as payload commander on STS-77. Before the Australian-born scientist was selected as an astronaut candidate in 1992, he was a NASA Jet Propulsion Laboratory (JPL) employee who became leader of that center's program for microgravity materials processing in space.

Bonnie J. Dunbar (Ph.D.) has trained in Star City, Russia, as a backup Mir crew member. She is on her fifth Shuttle flight. Dunbar became an astronaut in 1981 after working at Johnson Space Center as a project officer/payload officer. She holds a doctorate in mechanical/biomedical engineering.

James F. Reilly II (Ph.D.) is a first-time space flyer who was selected for the astronaut program in 1994. He was an oil and gas exploration geologist before his selection and holds a doctorate in geosciences.

Michael P. Anderson (Maj., USAF) is another space rookie who was selected by NASA in 1994. He has been an Air Force aircraft commander, instructor pilot and tactics officer.

Salizhan Shakirovich Sharipov of Kirghizia was selected as a cosmonaut-candidate in 1990 by the Gagarin Cosmonaut Training Center. He will be on his first space flight. He was a Russian Air Force pilot-instructor before his selection.

David A. Wolf (M.D.) is a medical doctor and a flight surgeon in the Air National Guard. He transferred to the Mir on his second Shuttle flight, STS-86. Wolf was selected as an astronaut in 1990.

The Shuttle-Mir docking missions represent Phase I of the International Space Station (ISS) flight program prior to the Phase 2 construction scheduled to begin in the summer of 1998. The international cooperation and on-going scientific research conducted aboard the Shuttle orbiter and by the U.S. and Russian crew members aboard the Mir are considered by NASA to be laying the foundation for the construction and operation of the ISS. One of the goals of the Shuttle-Mir missions is to understand more fully how to operate an international space station, providing researchers from all over the world access to laboratory facilities in space.

When Andrew Thomas leaves the Russian orbital platform during the last docking mission, the STS-91 space flight now targeted for May 1998, he will be ending a joint program that has led to significant gains in advanced technology, earth sciences, fundamental biology, human life sciences, microgravity and ISS Risk Mitigation research that began when U.S. astronaut Norman Thagard boarded Mir in March 1995.

The SPACEHAB Double Modules (DMs) located in Shuttle orbiter payload bays have played a critical role in Shuttle-Mir docking missions by serving as the means to transport Russian supplies, logistics items and experiments to Mir. Some of the 4,435 pounds of equipment that will be transferred from the DM in Endeavour's payload bay during STS-89 docking operations include a gyrodyne, storage batteries, clothing, personal hygiene, and sleeping articles and food and water containers. More than 1,400 pounds of water will also be supplied from Endeavour's fuel cells. Other equipment includes the hardware for International Space Station Risk Mitigation Experiments (RME) that will be conducted aboard Mir, as well as advanced technology, microgravity and NASA Human Life Sciences investigations.

The goal of ISS RME experiments conducted aboard the Mir and the Shuttle orbiter is to gather information to help improve the design of the ISS in the areas of crew health and safety. During STS-89, the Mir Electric Field Characterization (MEFC) experiment will monitor internal and external radio interference and then be returned to the SPACEHAB module. The Cosmic Radiation Effects and Activation Monitor (CREAM) is an RME experiment aboard Endeavour. Five other RME experiments will measure ionizing and cosmic radiation, expose materials to the Mir external orbital environment and test the Mir potable water processor and a water treatment process designed for use on the ISS.

Other experiments that will be carried out aboard the Russian space station by the STS-89 and Mir 24 crews include two Advanced Technology investigations, the Astroculture and Advanced X-Ray Detector (XDT) experiments. Microgravity experiments will include the Diffusion-Controlled Crystallization Apparatus for Microgravity (DCAM) hardware to manufacture protein crystals, the Mechanics of Granular Materials (MGM) experiment, and the Space Acceleration Monitoring System (SAMS). Sample items from the Biochemistry of 3-Dimensional Tissue Engineering experiment (BIO3D) already aboard Mir will be returned aboard Endeavour.

The hardware for six NASA/JSC Human Life Sciences experiments that will be carried out when Thomas is onboard Mir will be transferred inside the Russian orbital outpost during STS-89. These investigations will help determine the effects of long-duration spaceflight on crew members' back muscles and spine, immune systems, interpersonal performance, renal systems and cardio- vascular neural control mechanisms.

Several experiments in addition to RME experiments will also be conducted in the orbiter crew cabin middeck area. The Closed Equilibrated Biological Aquatic System (CEBAS) Minimodule is a habitat for aquatic organisms that is under development by the German Space Agency and Kennedy Space Center. It will allow the orbiter crew to conduct gravity-related experiments in the areas of zoology, botany and developmental biology. The hardware for the Microgravity Plant Nutrient Experiment (MPNE) will fly for the first time to validate its performance in space. It is a part of NASA's Advanced Life Support System (ALS) Test Facility. Another middeck experiment is the Human Performance experiment that will be used to investigate the ability of the STS-89 crew to perform cognitive and psychomotor tasks in microgravity.

A Get Away Special (GAS) payload carried in Endeavour's payload bay that is sponsored by the Chinese Academy of Sciences that contains five experiments. Two experiments will conduct metallurgical research and three will be used to perform crystal-growth-related investigations.

Endeavour was outfitted for Mir and ISS docking operations during its first Orbiter Maintenance Down Period (OMDP) at Palmdale, Calif., and returned to KSC March 26. Endeavour was mated to its external tank and solid rocket boosters in the Vehicle Assembly Building (VAB) Dec. 13 and transported out to Launch Pad 39A Dec. 19. The SPACEHAB-DM payload was moved to the pad and installed in Endeavour's payload bay on Dec. 20. The Terminal Countdown Demonstration Test (TCDT) was rescheduled for Jan. 9-10, 1998.