So Easy Even a Child Can Do It
If you've ever struggled to thread a nut onto a bolt in an awkward spot, you know how frustrating and time consuming it can be. But imagine trying the same task wearing heavy work gloves and the ultimate in "coveralls" -- a space suit -- while you and your tools float weightlessly. Working in space isn't easy. 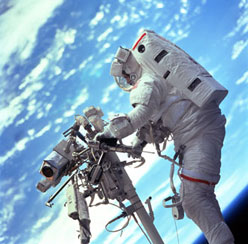 While ZipNuts™ may sound like a new breakfast cereal, they're actually a Space Age answer to some nuts-and-bolts assembly problems. Now this same technology used by astronauts for assembly and repair jobs in space is offering many down-to-earth solutions, as well.

Image at Right: Astronaut Steven L. Smith, payload commander on STS-103, stands on the mobile foot restraint at the end of the remote manipulator system (RMS). ZipNuts™ were used to service the Hubble Space Telescope during this December 1999 mission. Image credit: NASA

The technology works like this: A ZipNut™ can be installed by simply pushing it onto a bolt in one motion, eliminating the difficulty of threading a traditional nut. When the ZipNut™ reaches the end of the bolt's threads, it can then be tightened by simply twisting it.

This innovation improves both the speed and accuracy of the task. That translates into a big savings in many work environments, not only in dollars, but sometimes even in lives. One such live-saving use is in mechanisms for extracting victims of auto crashes, building collapses, cave-ins and construction accidents. When time is of the essence, the quick connect and release can mean the difference between life and death. 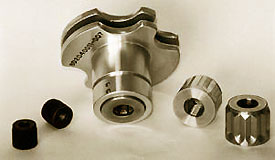 Image at Left: ZipNuts™ like these are designed for construction and repair work in space. Image credit: ZipNut Technology, LLC

ZipNut Technology, LLC of Falls Church, Va., is the creator of this innovation, which was first developed to NASA's requirements for a Space Shuttle flight in 1989. Since then, ZipNuts™ have been used not only aboard the Shuttle, but in construction of the International Space Station and during repair of the Hubble Space Telescope.

Now produced in a number of different sizes and materials -- such as stainless steel, aluminum, titanium, brass and even plastic -- the earth-bound industries that benefit from them are as diverse as the materials themselves. 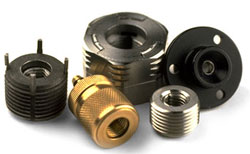 Image at Right: ZipNuts™ in a variety of materials and sizes are utilized in diverse industries. Image credit: ZipNut Technology, LLC

These fastening mechanisms are used in the same ways as their traditional counterparts, but with the added flexibility of speedy installation and removal, and in some cases, even added strength. One such strength benefit is in high-pressure connections, where the pressure actually works with the connector to make it more secure. 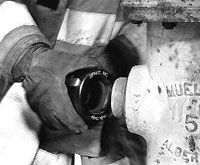 Image at Left: Quick connections for firehoses not only save time when time counts, but also perform well under high pressure. Image credit: ZipNut Technology, LLC

Another big advantage ZipNuts™ have over traditional threaded fasteners is their ability to work in spite of problems like rust, paint and damage that would normally prevent traditional connections from being made.

So while you may go through your day without giving much thought to the nuts and bolts that hold together our mechanical world, a little piece of Space Age technology is playing its part in making work easier here on Earth, as well as beyond.