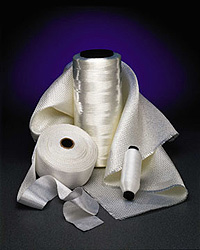 If superheroes were real, their uniforms would be made of Nextel. Stronger than aluminum, fireproof and able to withstand meteoroids, Nextel is the wonder ceramic fabric that protects NASA's Space Shuttles and keeps satellites from getting smashed to pieces.

Ceramics are known for their incredible strength and superior heat resistance. Ceramic fibers are made by super-heating chemicals like silica until they are molten, and then spinning them into hair-like strands. These strands can then be chopped up and mixed in with other chemicals to make new compounds or woven into useful fibers. The Minnesota-based company 3M developed this technology and turned it into a family of fabrics and textiles known as Nextel.

NASA initially used Nextel in Space Shuttle development. When engineers needed materials for Shuttle tiles that could stand up to the heat of reentry, they turned to the versatile ceramic. Later, the fibers were used to fill gaps between orbiter tiles and were woven into insulation blankets, heat shields and other protective items.

With Nextel's success in space flight, it only seems natural that the fabric can be used in the aviation industry. Nextel Flame Stopping Dot Paper is capable of resisting fire penetration for over four minutes at 2,000 F. That kind of resistance makes it perfect for lining and protecting surfaces throughout airplane compartments. But fire isn't the only thing Nextel is good at stopping. 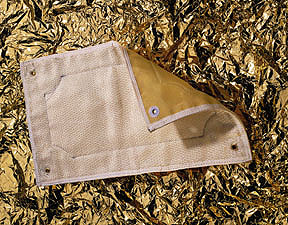 After 40 years of launching objects into space, there's a lot of debris floating around in orbit. In fact, there are approximately 100,000 fragments one centimeter or larger circling our planet that could pose a serious problem to spacecraft. Knowing this, NASA engineers set out to design shielding to protect space vehicles from the marauding objects.

Image to left: A lightweight "Stuffed Whipple Shield" designed to defend spacecraft like the International Space Station and satellites from the impact and potential harm of floating space debris.
Credit: NASA

While searching for an answer, engineers with NASA's Marshall Space Flight Center in Alabama and Johnson Space Center in Texas discovered Nextel's impact protection ability. It turns out that combining the fiber with Kevlar, a material used in bulletproof vests, produces a fabric that is more impact resistant than even aluminum plating. Woven into a sheet known as a "Stuffed Whipple Shield," the technology is lightweight yet strong enough to fend off meteoroids and other space debris. Currently, the shield is being used aboard the International Space Station and orbiting spacecraft.

With so many important uses, who knows where Nextel will be put to work next. One thing's for sure: whether helping a Shuttle endure reentry into the Earth's atmosphere, resisting flames or deflecting meteoroids, Nextel does a heroic job under dangerous circumstances.