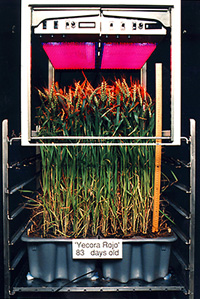 There's nothing like the look and taste of perfectly ripe produce. Eaten at the right time, fruits like bananas can be slices of freshly picked paradise. But wait a day or two and your bit of heaven can turn into a disgusting, gooey, brown pulp.

The culprit? A fickle chemical known as ethylene.

Ethylene is a hormonal trigger in plants that causes cells to degrade and fruit to ripen. A good example is the banana. The presence of ethylene is what causes the banana to go from hard and green to soft and yellow.

However, once ethylene is released, it keeps coming and will soon turn perfectly ripe fruit into a decaying and putrid mush. Normally, fresh air and rain helps to dissipate a lot of the ethylene surrounding plants and slows the spoiling process. But for NASA's plans to grow fruits and vegetables in space, getting rid of the ethylene is a far more complex and suffocating problem.

Future NASA space missions may be long enough to require astronauts to grow their own food to eat. In order to cultivate fruits and vegetables in space, the seeds have to be grown inside enclosed plant growth chambers. That means no wind, no rain, and way too much ethylene.

To deal with the rotting ethylene, researchers with the Wisconsin Center for Space Automation and Robotics worked in cooperation with NASA to devise a filtering system to remove - or scrub - the excess chemical from the chamber atmosphere. Known as "ASTROCULTURE," the device has flown multiple times aboard NASA's Space Shuttles. The filtering system works by drawing air across a bed of titanium dioxide pellets and a shower of ultraviolet light. The process is 99 percent effective with carbon dioxide and water vapor as the only byproducts.

After a number of successful Shuttle flights, the ethylene scrubber has been put to good use here on Earth.

While grocery stores and produce markets do everything they can to keep their stock of fruits and vegetables as fresh as can be, it's often a losing fight. Sooner or later, ethylene will claim its victory in the battle for freshness.

Image to left: Plants being saturated with ultraviolet light inside the ASTROCULTURE. Credit: NASA

But now the food industry has a new weapon for keeping lettuce crisp and bananas bright: The "Bio-KES" filtering system. Built by KES Science and Technology Inc., of Atlanta, GA., the Bio-KES system uses the same technology as ASTROCULTURE. Designed specifically for the food industry, the Bio-KES can be installed in storerooms and displays, increasing the shelf life of perishable foods by more than one week.

Outside of the produce industry, a variation of the Bio-KES system called the "AiroCide TiO2" has also been adapted to clean dangerous chemicals and germs from the air.

The day may come when a member of the first Mars exploration crew peels a tasty and sweet banana weeks and months from home. For now, thanks to ethylene scrubbing systems, you can at least enjoy yours tomorrow.