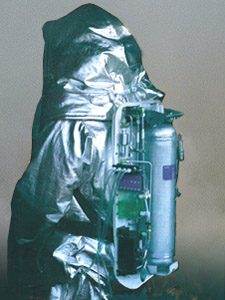 In a rescue situation such as a fire or a chemical spill, every second is crucial for both the rescuer and those who need help.

The Supercritical Air Mobility Pack® (SCAMP) provides at least one hour of breathing air and even cools the wearer's body, helping to prevent heat exhaustion. Current commercially-available systems require emergency workers to carry heavy, high-pressure compressed air cylinders. Although the SCAMP is somewhat smaller and lighter than traditional packs, it has more capacity.

In the Space Program, supercritical fluids -- in which the distinction between liquid and gas no longer exists -- are used in life support and fuel cell electrical power generation systems. That technology was first adapted into a compact liquid air breathing apparatus for Kennedy Space Center's launch pad rescue personnel. The pack provides at least 30 minutes of air that can be vital to a vigorously working rescuer, and its size wouldn't prevent a wearer from crawling through a small opening only 20 inches square. From that need, the SCAMP was born.

A high temperature fiberglass backpack contains the SCAMP dewar, a tank that holds the supercritical air. Low system pressure forces the super-cold air out of the dewar and through a series of heat exchangers, which warm the air to a comfortable breathing temperature while the other side of the heat exchangers cool the body through the use of a liquid-cooled garment.

The wearer breathes through a typical face mask. Further enhancing the simplicity of the SCAMP design, the heat exchangers have no moving parts and the system doesn't require complicated user controls.

A lighted display on the backpack's harness indicates how much air is left, and an alarm sounds when the tank is less than 25 percent full. Fortunately, the vessel can be quickly filled.

The SCAMP system has beneficial uses outside of the space industry as well. For example, firefighters battling blazes in large or tall buildings or in tunnels would need greater air capacity, as would hazardous materials crews trying to avoid toxic fumes in bulky protective garments. Other uses include shipboard firefighting and mine rescue. Even our men and women in the military could benefit in the event of a chemical or biological warfare attack.

When lives are in danger and a few extra minutes can mean the difference between life or death, SCAMP will be there to help those who help others.