Robonaut Shows Sensitive Side
In the not-so-distant future, the hand tightening bolts during space structure assembly might not be human. Tomorrow's astronauts will find themselves working side by side in space with human-like robots called "Robonauts." And while the faceless machines might look a little strange, these Robonauts are really quite sensitive. 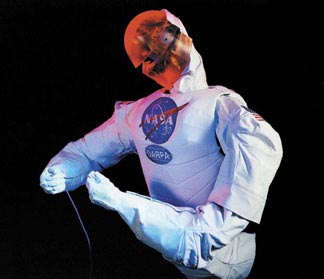 Don't expect to see them making the rounds on the talk-show circuit discussing their feelings, though. Their kind of sensitivity is strictly high-tech.

Now the technology bringing these Space-Age helpers to life is also at work in some surprising places. One common element drives these innovations, both on Earth and in space: sensors.

When the Robonaut was on the drawing board at NASA's Johnson Space Center in Texas, developers needed advanced sensors to measure the movements of the human-like hands and forearms they were designing. These "hands" had to be capable of exerting just the right amount of force and control to perform critical jobs. They needed to mirror the skillfulness of a human hand.

For example, when a person reaches out, picks up a foam cup filled with coffee and lifts it to drink, the hand responds automatically. The fingers close around the cup with the right amount of grip to pick it up without crushing the cup or dropping it. To simulate this kind of control in the hands of the Robonaut, Astro Technology Inc. in Houston developed the Fiber-Optic Sensor System.

This system design overcomes some of the limitations of older robotic methods that were more cumbersome. The new fiber-optic sensors use a light source, so they are immune to electrical "noise" and require significantly less cabling to measure the bending of the "fingers" and force of the touch. Add to this the reduced size and weight of the components, and they are ideal for space flight and operation.

This not only is great news for Robonaut, but these NASA-inspired innovations are also paving the way for some important commercial uses for the fiber-optic sensors.

The sensors may help to tap new deepwater oil reserves around the world. This would ensure a flow of fuel for the future, while protecting the environment by preventing catastrophic pipeline failure. Astro Technology's engineers adapted the system to provide this new monitoring capability to the oil and gas industry. The sensors can measure fatigue on undersea pipelines, as well as offshore drilling and oil production rigs. The system can use the risk management software the company developed to calculate and predict repair needs. 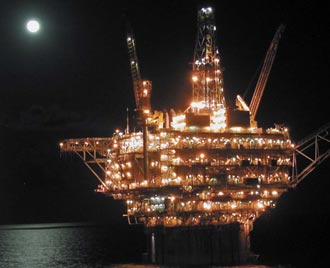 Other industrial uses envisioned for these super-sensors may include aircraft structural monitoring and auto industry applications. Virtually any situation requiring small but accurate monitoring sensors might benefit from the technology.

Meanwhile in space, these sensors will continue supporting current and future development of the Robonauts. The software could also be adapted to help monitor other critical elements of space vehicle structures and their propellant lines for added safety.

So whether in space, on Earth or under the sea, NASA's "sensitive" technology is lending a hand.