Down-to-Earth Safety From Space
A hamburger or eyeliner may not immediately bring to mind Space-Age technology, but the safety of these items just may depend upon it.

The same technology developed by NASA to help astronauts quickly and accurately test for microorganisms while in zero gravity paved the way for a variety of safer products in our everyday lives here on Earth. This same technology also allows hospitals to drastically cut the time needed to identify and treat bacteria-caused illnesses.

The product that makes this identification possible -- known as VITEK® -- began with a project developed for NASA by McDonnell Douglas Corporation in the 1960s. The AutoMicrobic System became the forerunner of the technology that is used today during U.S. space missions. 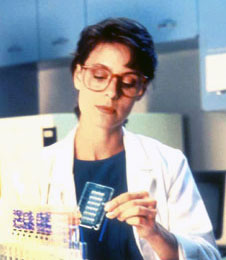 Since 1989, the VITEK® system has been owned and marketed by the French pharmaceutical company bioMerieux. Diverse industries use it for quality control testing of both raw materials and finished products. VITEK® is used in monitoring water supplies, ensuring the security of public health through food testing, helping the pharmaceutical and biotech industries manage microbiological risks, and providing quality control of raw materials and finished product testing of cosmetics.

Image at Left: "Test Cards" like the one held by this lab technician are at the heart of the VITEK® system. Image credit: NASA

While these preventative tests aim to keep us from getting sick, the same technology is also employed by hospitals in diagnosing and treating those who are already ill.

The technology saves time and labor when detecting harmful microorganisms in the human body -- pinpointing the type causing the infection and determining the effectiveness of various antibiotics in treating it. Using other methods, this process could easily take as long as 24 hours. This process shortens the time needed to identify the source and the treatment to as little as a few hours. 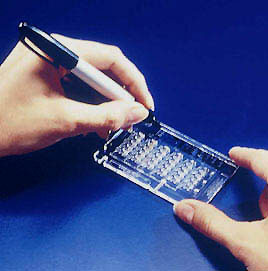 At the heart of the VITEK® system are disposable plastic "Test Cards," which are approximately the size of playing cards. Each card contains 30 tiny "wells" that contain the material needed to test the samples. One series of cards identifies the organism, while another determines the effectiveness of various antibiotics. The test samples are vacuum-drawn into the wells of the cards, which are then sealed and loaded into a reader/incubator.

Image at Right: Samples to be tested are loaded into the small wells on the surface of each card. Image credit: NASA

A photo-optical scanner periodically scans each specimen, monitoring changes in cell growth. The results are reported to a computer, which automatically prints a final report as soon as the results are available.

Anywhere from 32 to 480 cards can be tested at the same time, depending on the size of the system in use. This flexibility allows both large and small hospitals to take advantage of the technology in treating their patients.

Whether it's the water we drink, food we eat, products we use or health care we receive, this space-tested technology makes it a little safer for us here on Earth.