Fruits for Their Labor 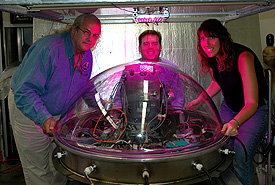 After a dry, dusty day exploring Mars, it's easy to imagine how delicious a fresh baked potato or steamed carrots might taste to a hardworking astronaut. Homegrown vegetables would not only be a nice alternative to freeze dried meals, but they'd help provide a constant supply of food for exploration crews while on the planet. At NASA's Space Life Sciences Lab at Kennedy Space Center in Florida, a team of engineers are devising ways to keep an astronaut's pantry stocked by designing greenhouses to grow vegetables on barren Mars.

A round-trip to Mars will take more than a year and a half, requiring more food than a spacecraft can hold. Vegetables are the best candidate for feeding astronauts because the seeds are easy to carry, can be germinated in space, and then planted upon reaching the surface of Mars. At the Space Life Sciences Lab, an inter-disciplinary team of scientists are using their green thumbs and sharp minds to create a reliable system for growing vegetables in space.

Erin Wilkerson, an agricultural engineer from the University of Florida, is trying to figure out if plants will survive or wither and die in a greenhouse on Mars. She's answering this question by taking a close look at the speed at which plants expel or retain moisture in atmospheres that range from thick and moist like Earth to conditions wispier and drier than Mars. "Can plants sense pressure or do they just lose their water faster?" asked Wilkerson.

The radish plants Wilkerson is using for her experiment are grown in conditions of varying air pressure, humidity, carbon dioxide concentration and light. "Really, what I'm after is a mathematical model to see if I can understand the steady evaporation rate and calculate it."

Image to left: Erin Wilkerson checks the seal on one of her environmental test chambers. Credit: NASA/KSC

"It's exciting to work on the project because it's really stretched my imagination," said Wilkerson. Individual radish plants are grown inside capsule-shaped containers stored in a climate-controlled room. Wilkerson called on her hefty engineering skills to construct the specialized capsules that are sealed tight and equipped with sensors capable of controlling the internal environment. The talented engineer even created software to track the experiment from a computer cart sitting just outside the room. "I wrote this program to monitor everything," she said.

Wilkerson's work to determine how plants behave in low pressure is critical in designing a Mars greenhouse. If plants can grow well in lower air pressure, this means explorers won't have to build immensely heavy and expensive structures to raise crops in a high-pressure, Earth-like atmosphere. In fact, it's possible the first human visitors may grow food inside spacious and lightweight, inflatable greenhouses.

On the red Martian plains, inflatables offer an efficient use of materials and space. "You can bring something to Mars with a low mass and get a large volume," said Phil Fowler, a scientist with the Space Life Sciences Lab. While Wilkerson determines the tolerance of plants for lower pressures, Fowler is testing the equipment to be used in the greenhouses. 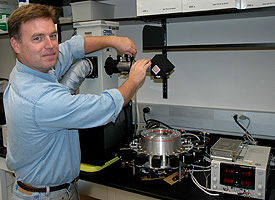 Image to right: Jim Clawson uses a tensile tester to see how different plastics stand up to pressure and UV light. Credit: NASA/KSC

"The interesting thing Erin and I dug up is the affect of gravity on these systems. It's really significant," said Fowler. Equipment like sensors, heaters and lights built on Earth can have problems operating correctly on other worlds. Differences in gravity and atmospheric density between planets can affect how heat spreads and air moves around. In the low pressure and gravity of Mars, lights and heaters may quickly overheat because of reduced air flow to cool them. "It was one of those things that never dawned on me until she came up with an equation and there was this gravity function in it. I thought, 'What's that doing in there,' " said Fowler. "There are all of these little details that we have to work out."

Just what an inflatable greenhouse is made of could hinge on research conducted by Jim Clawson from the University of Colorado. "I'm looking at the materials you would use for a greenhouse on Mars," said Clawson. The greatest threat to a greenhouse and its plants is the planet's intense ultraviolet radiation. "Mars' UV (ultraviolet rays) will harm most plants quite readily," said Clawson. The materials scientist is focusing on transparent plastics in an effort to find a balance between something that lets in a healthy amount of light while protecting plants from lethal UV. "If we go transparent, that gives us light, and any light we don't have to produce is good," added Wilkerson.

When the final design of the Mars greenhouse is finished, it's likely to be one of the most cleverly engineered units in technological history. Thanks to the Space Life Sciences Lab's diverse group of scientists, astronauts can be sure the greenhouse is up to the task and just what they need to keep food on the table.