Staying Fit - on Earth and in Space
If you think it's hard to stay in shape on Earth, try keeping fit in space. 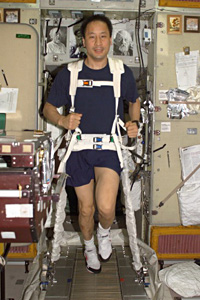 During space flight, the microgravity environment is almost too easy on the human body and doesn't give the resistance needed for exercise. In fact, astronauts who spend four to six months in space -- such as International Space Station crews
-- lose bone mass at a rate of about 1 to 2 percent per month on orbit.

But the Resistance Exercise Device (RED) system on the Space Station is part of a "tripod" of equipment on board the Station that helps to offset that loss through muscle and strength training, aerobic activity and cardiovascular training. Countermeasure activities typically conducted on orbit include the Resistive Exercise Device, which simulates weight lifting in microgravity; a Treadmill with Vibration Isolation System (VIS), which is a modified treadmill for microgravity; and a Cyclergometer with VIS, which is a modified cycle for microgravity.

To understand what astronauts are up against, imagine what would happen to your body if it never encountered any resistance. What if your legs didn't have to hold up your body weight? What if you never had to pick up anything, or could move from one side of the room to the other with just a little push? You'd experience bone loss, and your muscles would weaken in a process called atrophy.

On the Station, the RED system is used to counterattack the muscular and skeletal problems brought on by extended time in microgravity. It's proven successful: The ISS Expedition 1 crew completed more than 30,000 exercise repetitions on the RED during their 141-day stay in orbit. 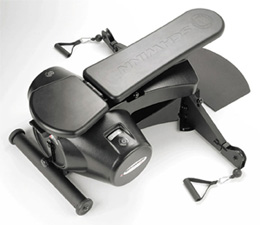 The RED system is powered by lightweight, portable SpiraFlex® technology, which creates resistance by storing and delivering mechanical power. Here's how it works:

Special synthetic compounds called elastomers, which have the stretching properties of natural rubber, are molded into several patented shapes. Each shape creates a different type of resistance. By varying how these parts are used -- alone, linked together, or used in combination with other devices -- almost any type of exercise can be achieved.

Funded by NASA and developed at the Agency's research facilities, the same space-inspired technology is also available to help people on Earth stay in shape. Compared to equipment using traditional steel springs to create resistance, SpiraFlex technology provides three times the power of traditional equipment. It is also long-lasting, and does not corrode or conduct electricity like steel springs. Additionally, SpiraFlex is inexpensively manufactured, easily assembled and quietly operated because no metal parts are used.

For these reasons, SpiraFlex technology is now used in an international fitness program for health clubs and certain retail distributors. The program uses exercise machines powered by SpiraFlex for 45-minute resistance training sessions taught by a certified coach in a motivational environment.

This NASA-related technology is helping people lead healthier lives -- both on Earth and in space.