The Strawberry Connection
What will it be like for our future astronauts, traveling through the dark expanse of space to the Moon, Mars and beyond, millions of miles from everything they know and love?

It could get a little lonely out there, surrounded by gray walls, knobs and computer screens. But scientists at Kennedy Space Center in Florida are trying to provide NASA's space travelers with a connection to Earth by growing and caring for live plants they can also eat. 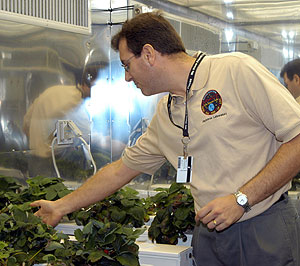 A variety of fruits and vegetables are being grown in the Space Life Sciences Laboratory at Kennedy. Peppers, tomatoes and several kinds of strawberries from around the world are being tested to see which type will best support astronaut crews physically and psychologically. This is part of the Bioregenerative Life Support Systems project, which also deals with oxygen revitalization, crew diet supplementation, and water purification for space.

"Once they leave and are a few million miles away from Earth, anything they bring from home is going to have a huge psychological effect. For years, plants have been used as therapy," says Jeff Richards, a plant physiologist with Dynamac Corp. "Being able to complete their tasks and then have a few hours (or minutes) to sit back and smell the aroma of fresh grown plants, smell the aroma of growing strawberries, work with them and talk with them, the benefits are just immeasurable."

Richards says plants have been used for therapeutic purposes for years. By reducing feelings of isolation, crew productivity could increase and provide better scientific results on long-term missions. The enthusiasm and dedication of everyone involved in the project is evident when visiting the SLS Laboratory. The state-of-the-art facility has within its 18 controlled-environment growth chambers a beautiful assortment of plants that are lovingly tended by Richards. Along with other scientists from multiple universities, Richards is testing plants to see how they'll grow in a spacecraft-like environment for long-duration space exploration.

The plants were chosen for their robustness and adaptability to growth in environments similar to what would be found on a transit vehicle or planetary habitat. The conditions within the growing chambers mimic the environment of the International Space Station. The plants are also grown in a soil-free, recirculating stream of nutrients. 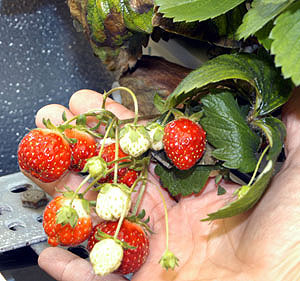 The strawberries currently being tested are classified as "short day plants," meaning they can be induced to flower under low-light conditions, a situation that may be an issue when growing plants under spacecraft-like environments. In addition, their blooms are generally situated outside the canopy structure of the plant. This is important since there are no bees in space, and the blooms have to be pollinated either mechanically or by hand.

Image left: A cluster of strawberries that have been grown in the SLS Lab's controlled environment chamber. Image credit: NASA

These crops can also augment the crew's diet with fresh flavors and add different textures to their diet of prepackaged foods. Furthermore, antioxidants from strawberries and tomatoes can help to reduce the cellular oxidative stress astronauts may face from cosmic radiation once they leave Earth's protective magnetic field. Finally, while tending the plants, the crew exhales CO2 which the plants thrive on, creating oxygen in return; it's a mutual life-cycle success story.

"I'm very excited about coming in to work every day and looking at fresh fruit, and it goes back to the psychological aspect of growing stuff that looks so good and is so tasteful," says Richards. "It just naturally gives you that bounce, that joy, that fun feeling, and you're going to see that same aspect from the astronauts and how they're going to react to their environment to have plants with them."

Here on Earth, preparation for fulfilling the Vision for Space Exploration is in full swing. NASA and its partners are diligently working on ways to sustain a balanced and healthy lifestyle for our future space travelers. And the sweet, tantalizing flavor and fragrance of strawberries are taking center stage.