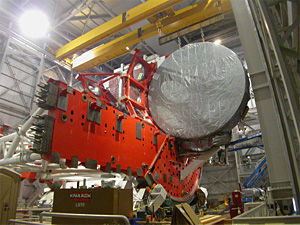 A new tool in humanity's search for new worlds is one "eye" closer to completion.

The first of two huge primary mirrors has been installed in the Large Binocular Telescope. This marks another important milestone in the construction of a ground-based instrument that will obtain some of the first images of planets around other stars, known as extrasolar planets.

Image to left: The first 8.4-meter primary mirror, in its cell, is attached to the telescope. Credit: University of Arizona

Perched atop Mount Graham in Arizona, the innovative telescope will "gaze" into space with an enormous pair of eyes. Beginning sometime between 2006 and 2013, it will scan nearby stars for planets that might be suitable to life.

The goal of the project is to construct a binocular telescope using two 8.4-meter mirrors on a common mount. Because of its two mirrors, the telescope's resolution -- the amount of detail in the image -- will be equal to that of a single mirror with a diameter of 75 feet! 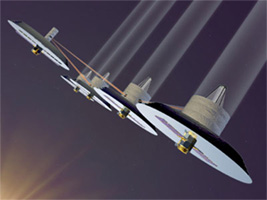 Image to right: Currently expected to launch between 2012 and 2015, the five-year Terrestrial Planet Finder mission will seek out and study planets outside our Solar System. Credit: NASA

A NASA-funded project will use the Large Binocular Telescope as a testbed to develop a technique that cancels the overwhelming glare from a star by interference of light. This allows the detection of nearby planets or dust discs that would otherwise be obscured by the much brighter star. The technique, known as nulling interferometry, is being studied in preparation for NASA's Terrestrial Planet Finder mission.