Space Lasers Keep Earth's Air Clean
Space laser technology is coming to our smokestacks and automobiles. Leave it to NASA to take its inventions to another level, helping to keep our air clean and breathable.

A recent NASA invention, originally designed to help lasers control carbon monoxide in the cold environment of space, is now being tested for use here on Earth. The technology is called Low-Temperature Oxidation Catalysts (LTOC). 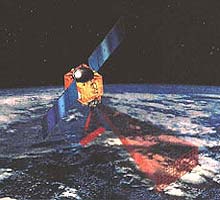 Scientists at NASA's Langley Research Center in Virginia are gearing a variation of this technology towards reducing the formaldehyde and carbon monoxide in smokestack emissions by a whopping 85 to 95 percent.

Image right: NASA wanted to operate carbon-dioxide lasers in Earth's orbit in order to research the chemical makeup of the planet's atmosphere but they had to be able to operate in the cold expanse of space. Image credit: NASA

Engineers are also looking to use LTOC technology to reduce pollution caused by auto emissions. Even though most cars today have catalytic converters, they're only effective when the engine exhaust reaches a high temperature.

LTOC technology could reduce the auto exhaust pollutions made up of carbon monoxide, hydrocarbons and nitrogen oxides by about 30 percent.

Why the push to reduce these gases from our air? Because carbon monoxide is a poisonous gas, hydrocarbons damage the Earth's ozone layer and contribute significantly to the greenhouse effect, and nitrogen oxide contributes to both smog and acid rain. Clean air is one of the only elements we can't live without.

The trick to why this new discovery will work on autos is that the air-cleaning process would begin the moment the vehicle is started. Right now, millions of cars start up in colder temperatures and release toxic gasses before the engine exhaust reaches a temperature high enough for the catalytic converter to be effective. 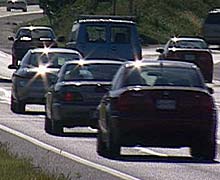 When you think about the billions of times cars are started each day, the amount of toxic gasses released into the atmosphere is staggering. Since the LTOC technology was designed to work in the sub-freezing temperature of space, the cleansing would start immediately, even in the cold catalytic converter.

When this new space-age technology is applied to everyday uses, everyone on the planet will benefit. In the meantime, NASA is monitoring Earth's atmosphere with several orbiting satellites, soon to be joined by Aura, one of NASA's most ambitious atmospheric monitoring systems ever launched.

NASA is now partnering with commercial industries to help bring smokestack and automotive LTOC systems to the marketplace.

As America's Vision for Space Exploration moves forward and we journey back to the Moon, then Mars and beyond, we'll need a healthy planet to return to. NASA is helping to make that happen.