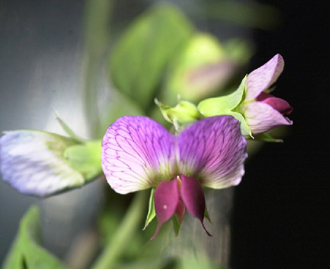 City dwellers often use creative means to garden in their limited spaces. Rooftop gardens and potted plants perched on balconies and window sills serve as their agricultural outlets. But what if you have no roof, no balcony, no window sill -- and no gravity? Welcome to the world of gardening aboard the International Space Station.

Image at Right: Orbiting high above the Earth, a bloom is suspended in weightlessness. The plant is part of a growth experiment aboard the International Space Station. Image credit NASA

To test methods for growing plants in the station's microgravity atmosphere, the Lada greenhouse was developed as a cooperative effort between Space Dynamics Laboratory at Utah State University and Russia's Institute of Biomedical Problems. Named for the ancient Russian goddess of spring, the wall-mounted Lada has been in use in the Zvezda module of the space station since 2002, when it was delivered aboard a Russian Progress spacecraft. 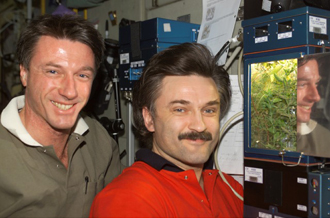 The greenhouse consists of a control module and two independent vegetation modules, which allows for comparisons in growing treatments. The compact size and wall-mount capability of the units make them ideal for the close quarters in the space station.

Thanks to Discovery's return to flight mission, scientists at NASA's Kennedy Space Center in Florida will get a close look at "root modules" used in the Lada as part of a study they developed to ensure the space-grown crops are safe to eat. The spent units were among more than a ton of cargo returned aboard Discovery in August. Dr. Jay Garland, chief scientist for the project, is excited about the chance to study the modules firsthand.

"We are receiving two of these units that have been up on the station and used to grow plants," says Garland. "And we'll be sampling these -- both the interior and exterior -- to look for what microbes are growing within this system." 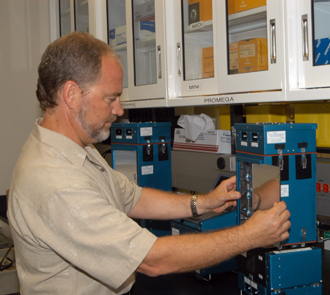 Image at Right: In a lab at NASA's Kennedy Space Center, Dr. Jay Garland examines a Lada greenhouse unit like those used to grow plant experiments aboard the space station. Image credit: NASA

This completes a one-year study to establish the best production and safety methods to use with the existing Lada greenhouse hardware.

In addition to identifying harmful organisms, the researchers also hope to determine how to get the most mileage from the units to maximize the number of plant cycles produced from each module.

"You plant multiple cycles in a given root module," Garland explains. "But then, after some period of time, when the plant growth declines because the nutrients have been used up, you just pull the module out and put in a new one." 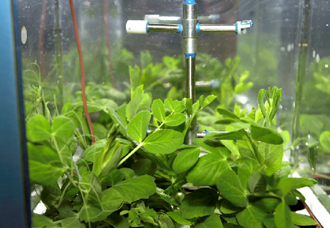 Image at Left: Plants grow inside one of the Lada greenhouse units, located in the Zvezda Service Module of the space station. Image credit: NASA

Studying these tiny space-borne gardens can help scientists further determine how future space explorers can effectively and safely grow plants to help supplement their diets on longer missions. In the process, men and women working in space can reap the positive psychological benefits that come from being intergalactic gardeners with a touch of green from home.