Reinventing the Wheel
NASA is working to increase the performance of the flywheel, a wheel that transfers energy to run a machine, so that this technology can replace chemical batteries on future spacecraft and potentially save millions of dollars. 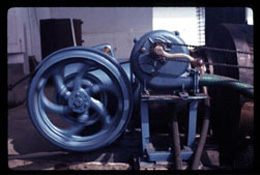 Flywheels operate similar to a spinning toy top, but spin at higher rates of speed and are much larger. They were more common before batteries were widely used, but are still used today in potter's wheels, gears in a clock, and in treadle sewing machines.

Image to left: In the days before batteries were readily available, flywheels were often used to generate power. Credit: NASAexplores

In the future, when NASA's vision leads humans to the Moon and beyond, flywheels could play a vital role in powering the vehicles that take us there.

Flywheels are wheels on a revolving shaft, used to regulate machinery or accumulate power. They store kinetic energy, also known as potential energy, within a rapidly spinning wheel and transfer it for use when needed. In a way, they're like non-chemical batteries, with a few extra advantages: They contain no acids or other hazardous materials, and they're not affected by temperature extremes the way many batteries are.

Typically, flywheels have been large steel wheels, rotating at low speeds. New technology makes it possible to use a more modern flywheel to store energy for electrical applications. Newer flywheels use a generator to spin the rotor and convert the kinetic energy to electrical energy. Today, flywheels provide backup power for hospitals and manufacturing plants. They are also being considered for use in hybrid electric vehicles. 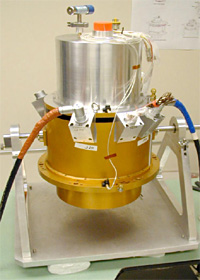 Image to right: A modern flywheel, like this one at NASA's Glenn Research Center, bears little resemblance to early flywheels. Credit: NASA/GRC

NASA has taken that concept even further. Researchers at NASA's Glenn Research Center in Cleveland -- and several other agencies, including Northrup Grumman Space Technologies, University of Texas Center for Electromechanisms, Texas A&M University, University of Toledo and Lockheed Martin -- have developed a flywheel energy storage system that has reached speeds of 60,000 revolutions per minute. This is the highest speed ever demonstrated for a flywheel, which works out to nearly 2.5 times the speed of sound. Their ability to reach such speeds and store so much energy makes them an ideal candidate for replacing rechargeable chemical batteries on future spacecraft.

With all of these technological advancements being made, you might say that NASA has reinvented the wheel.