Astronomers using information from the orbiting observatory are discovering the universe's expansion has been picking up speed. The finding sheds light on a force known as "dark energy," which experts believe will shape the fate of the universe. + View this Video 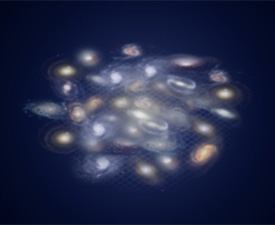 Dark energy, which fills the space between galaxies and drives them apart, is "perhaps the biggest mystery in physics," said Steve Allen of the Institute of Astronomy (IoA) in Cambridge, England.

Image to left: In this still image from an animation, the universe has just begun to expand after the Big Bang. Click image for animation. Credit: NASA/Space Telescope Science Institute

Scientists have long wondered if the universe will collapse in on itself billions of years from now in what many call the "Big Crunch." Another theory states it will expand so rapidly that everything is torn apart in the "Big Rip."

Fortunately, the Chandra findings indicate that these catastrophes might be ruled out. The density of dark energy appears to be fairly constant, or at least increasing slowly enough that the universe will simply continue to expand forever. If this is the case, many billions of years from now, only a few of the known galaxies we can see today will be visible.

According to Chandra data, the expansion of the universe was gradually slowing down until about 6 billion years ago, when it started to accelerate, presumably because of the repulsive effect of dark energy. 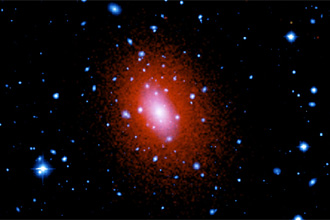 Now, thanks to Chandra's unique capabilities, astronomers are beginning to chip away at the wall of mystique surrounding dark energy.

Allen and his colleagues at the IoA used Chandra to study 26 galaxy clusters between 1 billion and 8 billion light years away.

Chandra's probe of dark energy relies on the unique ability of X-ray observations to study the hot gas in galaxy clusters. By using Chandra data to figure out the ratio of hot gas to dark matter, astronomers determined how far away the clusters were and at what point in time they were viewing them. They found the clusters were farther away than expected, indicating an accelerated expansion. 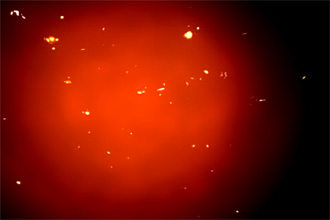 Image to left: In this still image from an animation, a galaxy cluster consists of galaxies (shown in white and yellow) and intergalactic gas (shown in red). Click image for animation. Credit: NASA/Chandra X-ray Center

Because galaxy clusters are the largest bound structures in the universe, scientists consider them as scale models of the universe in terms of matter content.

Einstein first proposed the concept of dark energy, calling it a "cosmological constant" in his General Theory of Relativity. He suggested that a repulsive force must be counteracting the pull of gravity, creating a sort of equilibrium to maintain a static universe that doesn't change in size. He later abandoned the idea, calling it the biggest blunder of his life, when Edwin Hubble's observations indicated the universe was expanding.

But it appears Einstein's idea had much more merit than he thought.

For now, astronomers still have many questions and dark energy is keeping most of its secrets to itself. But more detailed studies with NASA's Chandra, Hubble Space Telescope, Wilkinson Microwave Anisotropy Probe and future missions such as Constellation X should continue providing answers.