Not Your Backyard Compost Heap
"Yuck!"

If that's how you feel when your garbage can overflows, imagine what it's like for astronauts when they find themselves with a lot of garbage and only a little room to store it. 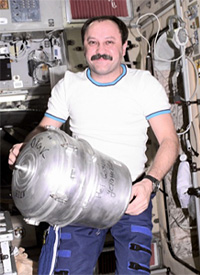 Researchers at NASA's Kennedy Space Center in Florida are using biology to hunt for a way to reduce the amount of space taken up by solid waste, primarily food waste. They also want to extract nutrients that might be used to grow plants in space.

"We want to regenerate and recycle as much as we can," said Dr. Richard Strayer, a microbial research scientist with Dynamac at KSC. "The best system wouldn't take up much space, power or crew time."

On the International Space Station, for example, solid waste is stored in bags and containers until a Russian Progress module arrives. Once the unmanned Progress is emptied of fresh supplies, it is packed with trash and sent back to Earth, where it is incinerated over the ocean during a controlled re-entry.

There are other ways to manage waste in space, but none are ideal. Burning uses valuable oxygen. Waste can be sterilized or dehydrated until it can be disposed of, but if it ever gets wet or comes into contact with germs, it will become a problem again.

A few years ago, KSC scientists participated in a study to see what Shuttle trash typically is made of and to determine the amounts of its components. The study allowed researchers to replicate the typical waste load in order to improve the process. 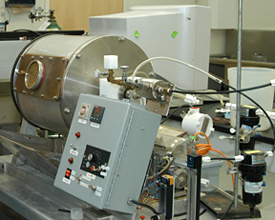 One of the methods in testing right now is the Research Space Bioconverter (RSB), a composter consisting of a rotating drum that contains waste for decomposition. Linked to a computerized data collection system in KSC's Space Life Sciences Lab, it's nothing like your backyard compost heap. Its goal is to find an efficient way to break down waste while extracting as many nutrients as possible.

Image to right: The Research Space Bioconverter is a rotating drum (far left) containing waste for decomposition. In the foreground is a control panel; in the background is the computer monitor for the data collection system. Credit: NASA/KSC

Strayer's team uses a regular food processor to create mock waste, or biomass, similar to what might be found on a spacecraft. Inside a rotating metal bioreactor, a microbial brew is mixed with the waste.

Microbes need oxygen to do their decomposition work, but oxygen should be spent on the crew instead of waste. However, composting anaerobically -- without oxygen -- can cause nasty smells. 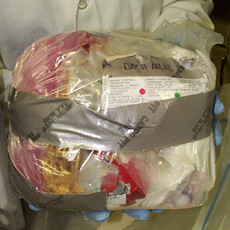 Image to left: Shuttle trash wrapped in plastic and duct tape, known as a "football," is not the best idea for long durations, such as on the ISS. Credit: NASA

The RSB is intended for use in microgravity. But waste management in a low-gravity environment and on long duration missions will become increasingly important as NASA prepares to send humans to the Moon, and Mars and beyond as part of its vision for exploration.

So, the next time you take out the garbage or toss a leftover sandwich into the kitchen trash, be thankful it's that simple on Earth. With research projects like the RSB underway, future spacefarers may find it almost as easy.
Anna Heiney
NASA's John F. Kennedy Space Center
› Back To Top