Celestial Illumination: The X-ray Glow from an Exploded Star 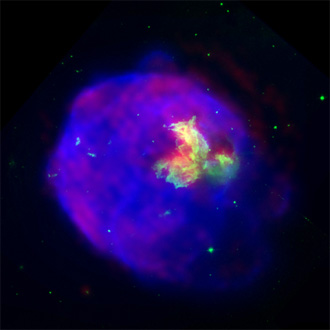 NASA's Chandra X-ray Observatory has imaged the glowing shell created by the destruction of a massive star. X-rays from Chandra (blue), combined with optical (green) and radio (red) data, reveal new details in the supernova remnant known as N63A, located in the nearby galaxy of Large Magellanic Cloud.

The X-ray glow is from material heated to about ten million degrees Celsius by a shock wave generated by the supernova explosion. The age of the remnant is estimated to be in the range of 2,000 to 5,000 years.

To get the full story of N63A, Jessica Warren and John P.Hughes of Rutgers University, and Patrick Slane of the Harvard-Smithsonian Center for Astrophysics also employed data from other wavelengths. Optical and radio emissions are brightest in the central region of the remnant, which appears as a triangular-shaped "hole" in the X-ray image. The hole is produced by the absorption of X-rays in a dense cloud of cooler gas on the side of the remnant nearest Earth.

A comparison of the X-ray image with the radio and optical images suggests that the shock wave is engulfing this massive cloud of dust and gas, and we see only the edge of the cloud nearest Earth. Collisions of such as this are thought to trigger the formation of a new generation of stars.

The fluffy crescent-shaped X-ray features that appear around the edge of the remnant are thought to be fragments of high-speed matter shot out from the star when it exploded, like shrapnel from a bomb. In the only other supernova remnant (the Vela supernova remnant) where such features have been observed, the crescent shapes are clearly produced by ejecta fragments. An alternative explanation is that they were produced when the shock wave swept over less-massive clouds located several light years away from the site of the explosion.

Chandra observed N63A on October 16, 2000 for more than 11 hours. These results were published in the Astrophysical Journal Letters in January 20, 2003. NASA's Marshall Space Flight Center, Huntsville, Ala., manages the Chandra program for the Office of Space Science, NASA Headquarters, Washington. Northrop Grumman of Redondo Beach, Calif., formerly TRW, Inc., was the prime development contractor for the observatory. The Smithsonian Astrophysical Observatory controls science and flight operations from the Chandra X-ray Center in Cambridge, Mass.

Additional information and images are available at:
http://chandra.harvard.edu and http://chandra.nasa.gov
Chandra X-ray Observatory
› Back To Top