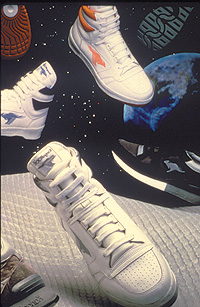 Ask most people to name consumer products that were originally designed for the Apollo missions and they'll mistakenly mention Tang and Teflon.

While Tang and Teflon didn't come from NASA, the Agency has developed many items we use every day without ever realizing their fascinating origins. The lunar era helped to create products most of us would be surprised NASA had anything to do with and that we probably wouldn't like living without. These items protect us, increase performance and make work easier.

Before 1971 the average weight of a firefighter's breathing system was more than 30 pounds. With that amount of weight on their backs, firefighters were battling their equipment along with the flames. Frequently, the added weight was so taxing that some opted to attack the flames without their breathing systems.

That all changed when engineers at NASA's Johnson Space Center began a program at the request of the nation's fire chiefs to adapt spacesuit life-support systems for use by firefighters. Four years later, the engineers had a design that weighed one-third less and offered a greatly improved fit and better visibility than the previous system. Fire departments across the country were quick to adopt the new system, enhancing the safety of the dangerous job.

Since the Apollo era, millions of people worldwide have literally been walking in the shoes of the astronauts. Thanks to clever spacesuit design, athletic shoes took a major leap forward in quality by incorporating manufacturing and design processes used in NASA's suit construction.

NASA changed athletic shoe construction quite truly where the rubber meets the road. A process known as "blow rubber molding" used in producing helmets was applied to create hollow athletic shoe soles designed to be filled with shock-absorbing materials. Following the establishment of this new molding process, a former NASA engineer named Frank Rudy pitched an idea for a suitable shock absorber to the Nike Corporation. Rudy's concept used a pad made of interconnected air cells placed under the heel and forefoot to cushion the blow. Sound familiar? With Rudy's pitch, Nike Air was born.

Thanks to the Moon missions, Black & Decker was able to pair cordless electricity with elbow grease and make the job of building America easier than ever. While on the Moon, astronauts were tasked with gathering soil and rock samples for analysis back on Earth. To help them, NASA asked Black & Decker to build a special drill for boring into lunar rock. The drill had to be small, lightweight and, most importantly, battery powered. Black & Decker's new drill proved to be a fantastic success and spawned the development of cordless tools for the medical, manufacturing, building and home consumer industries.

Beyond the advancements in science and space flight, the Apollo Moon missions blew open the door for new and practical inventions that revolutionized how we live, work and play. With one small step, American technology took a giant leap forward and changed our everyday lives.
Charlie Plain
NASA's John F. Kennedy Space Center
› Back To Top