Farming for the Future
Unlike travelers on Earth who have the convenience of roadside diners and fast-food restaurants, the dining options for space travelers are limited.

As NASA's astronauts prepare to fulfill the Vision for Space Exploration with increasingly lengthy missions, scientists are trying to find a way for them to grow their own food. 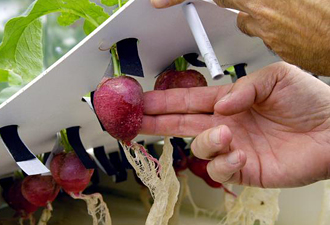 Plants offer a promising solution in providing food to astronauts thousands of miles from Earth. They could grow crops that would not only supplement a healthy diet, but also remove toxic carbon dioxide from the air inside their spacecraft and create life-sustaining oxygen.

Image to left: Radishes are one plant species researchers are studying for possible use as a food crop on long-duration missions. Credit: NASA/KSC

Since the Space Shuttle and even International Space Station expeditions are relatively short-duration endeavors, astronauts do well with physical and chemical forms of life support. But for future long-duration missions and colonies on the Moon or Mars, scientists believe a life support system with a biological component (such as plants) -- called a "bioregenerative life support system" -- has several benefits.

"If you continually resupply and deliver commodities like food, that will become much more costly than producing your own food," says Ray Wheeler, plant physiologist at Kennedy Space Center's Space Life Sciences Lab. "You can achieve some autonomy with bioregenerative capability."

But developing such a system isn't as simple as planting some fruits, vegetables and wheat in space or on distant planets.

"It's not a quick-start kind of thing," Wheeler says. "You don't suddenly say, 'We need a bioregenerative system for the Moon because we want to stay there for 12 months, or five years.' It takes a long time to build and evaluate these systems."

Scientists are investigating how different amounts of three factors -- light, temperature and carbon dioxide -- affect plant growth. A fourth factor is the species and variety of plants. 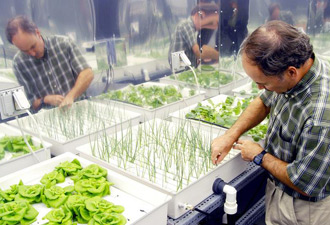 Inside closed plant growth chambers at KSC, radishes, lettuce and green onions grow "hydroponically" in nutrient-enriched fluid. Light, temperature and carbon dioxide levels are carefully controlled. Scientists are comparing how plant species grow together in "mixed cultures" versus by themselves in "monocultures."

Why would this matter? First, some plants give off chemical compounds that can poison their neighbors, clearing the way for the aggressive plant to spread.

"It's not common in crop plants. You don't see problems with invasive lettuce growing all around," Wheeler says with a smile. "But we want to confirm it."

Also, some plants may use nutrients more aggressively than others. For example, some species might be heavy nitrogen users that would be fine on their own but would take away from other species.

Another concern is the competition of plants for light, based on how they grow. If one species grows taller and spreads out wider than the species beside it, the larger plant may block the light from the smaller plants.

Apart from these environmental variables, scientists are examining the effects of different types of lighting on plants to determine which color best helps them grow. Another consideration is atmospheric pressure. 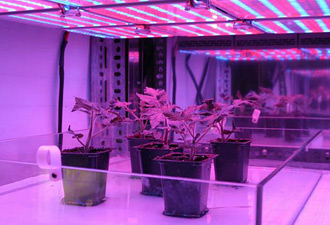 "We want to see how plants are affected if we reduce the pressure inside their environment, to make it more like that of the surface," Wheeler explains. "Some benefits of lower pressure would be more leeway in structural material choices, better visibility because you wouldn't need as thick a cover, and fewer leaks."

In the Vision for Space Exploration, NASA is already looking ahead to a future on the Moon, Mars and beyond. Thanks in part to the life sciences research underway today, tomorrow's astronauts may enjoy a more efficient life-support system... and some freshly grown food.
Anna Heiney
NASA's John F. Kennedy Space Center
› Back To Top