Houston, We Have a Solution
New research aboard the space station aims to adapt a tried-and-true repair tool to weightlessness. 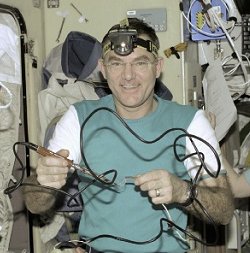 Even on the advanced spacecraft of the future, sooner or later things are bound to break. Space travelers on an extended mission to Mars, for example, would need to be ready to do small repairs just in case, soldering this, welding that.

In the unforgiving environment of space, a successful solder-repair to, say, navigation hardware or an oxygen pump could mean the difference between life and death.

"Surprisingly, relatively little is known about the unique physics of soldering in microgravity," says Richard Grugel, a scientist at NASA's Marshall Space Flight Center who specializes in the solidification of metals.

To learn more about it, Grugel and his colleagues Fay Hua of Intel Corporation and A.V. Anilkumar of Vanderbilt University have planned an experiment for the International Space Station called the "In Space Soldering Investigation" (ISSI). They hope the experiment will shed new light on the physics of soldering and, in the process, make the soldering iron a more reliable tool for astronauts.

Melted solder behaves differently in space. In the microgravity aboard a spacecraft, molten solder doesn't "feel" a downward pull as it does on Earth, so surface tension becomes more prominent and causes blobs of liquid solder to flow differently. In other words, soldering techniques that work on the ground may not form proper joints in orbit.

Below: A scanning electron micrograph of solidified solder on a wire. The precise angle at which the solder meets the wire is driven by forces such as surface tension, gravity, and wetting of the wire. Removing the effects of gravity lets physicists better understand these other influences. Image courtesy NASA. [Hi res version] 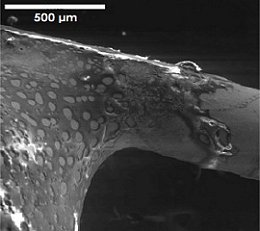 Even worse, those soldered joints could be much weaker in orbit. Gas bubbles in the molten solder that often rise to the surface and disappear on Earth can remain suspended within the liquid in orbit. That's because the pull of gravity is the force behind buoyancy, so in microgravity bubbles don't necessarily rise. These tiny bubbles become trapped within the solder as it solidifies, making the joint less effective and more prone to breakage--not a good thing when you're in the mission-critical environment of space!

"How prevalent are these gas bubbles in joints soldered in space? We need to find out, and perhaps find some way to get those gas bubbles out so that we can make good joints that won't break," Grugel says.

The experiment is straightforward: metal wires will be soldered together in various arrangements, reflecting common geometries important for making repairs. Space station crewmembers will use a soldering iron to join these wires with lead-tin solder.

While the shuttle fleet is grounded, room for sending research equipment and materials up to the space station is severely limited. The ISSI experiment was selected in part because it requires no "up-mass" sent to the station from the ground. The space station already has a soldering kit onboard and coils of silver-coated copper wire.

Below: The experiment will be performed with reshaped wire (top frame) and a soldering kit (bottom frame) aboard the space station. Image courtesy NASA. [ Larger view] 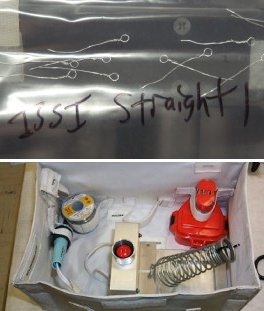 The Expedition 7 crew, which recently returned to Earth, fashioned the wire into L-shapes, loops, parallel threads, and other shapes in preparation for the experiment. The researchers plan to have the current space station crew (Expedition 8) perform the experiment during their stay, which is scheduled to last until April 2004.

While the experiment happens, the researchers will be able to watch it unfold live at NASA's Telescience Center at the Marshall Space Flight Center in Huntsville, Alabama. They'll be watching to see the differences in how the solder flows and the shapes it assumes in space, which will offer clues to the fundamental physics of molten solder.

If they see something unexpected, the live interaction will allow them to suggest procedure changes to the station crew members in real-time. After the samples are returned to Earth, the scientists will cut open the joints to see how many gas bubbles were trapped during the process, and they'll test how strong the joints are.

"We should be able to gain a window into how surface tension effects soldering in microgravity," Grugel says. "This will help lay a foundation for the future of in-space fabrication and repair."