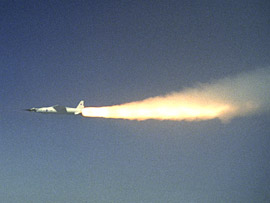 Image right: A modified Pegasus rocket ignites moments after release from the B-52B, beginning the acceleration of the X-43A over the Pacific Ocean on March 27, 2004. Credit: NASA

The unpiloted vehicle's supersonic combustion ramjet, or scramjet, ignited as planned and operated for the duration of its hydrogen fuel supply. The X-43A reached its test speed of Mach 7, or seven times the speed of sound.

The flight originated from NASA's Dryden Flight Research Center at Edwards Air Force Base, Calif. Taking off at 12:40 p.m. PST, NASA's B-52B launch aircraft carried the X-43A, which was mounted on a modified Pegasus booster rocket. The booster was launched from the B-52B just before 2 p.m. PST. The rocket boosted the X-43A up to its test altitude of about 95,000 ft. over the Pacific Ocean, where the X-43A separated from the booster and flew freely for several minutes. During the free flight, the scramjet engine operated for about 10 seconds.
Gray Creech
NASA' s Dryden Flight Research Center
› Back To Top