The new stamps are part of the U.S. Postal Service's 2006 definitive stamp program. Both feature computer-generated images of the X-15 created at NASA's Langley Research Center in the early 1990s to demonstrate the practical use of laser digitizer technology in the development of computer-based flight simulations. 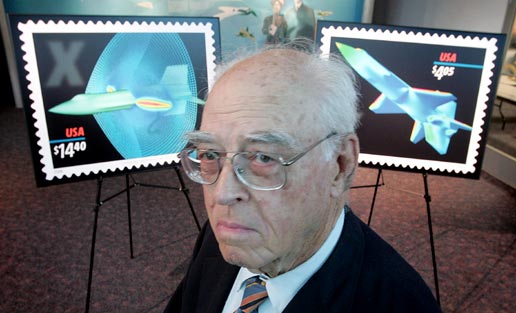 Image above: Jim Penland, a Distinguished Research Associate at NASA Langley Research Center in Hampton, Va., stands in front of the U.S. Postal Service's new X-Planes Priority and Express Stamps at an unveiling ceremony at the Virginia Air and Space Center. Both feature computer-generated images of the X-15 that were created by researchers at Langley's Geometry Laboratory. Penland worked for NASA and its predecessor -- the National Advisory Committee for Aeronautics or NACA -- for a total of 37 years. He was an aeronautical engineer on the original NACA X-15 research team. Credit: NASA/Jeff Caplan

The new stamps are just the latest in a long line of postage stamps commemorating NASA's accomplishments. Here's a brief look at some of the "NASA stamps" through the years.

On Feb. 20, 1962, John Glenn became the first American to orbit the Earth. At 3:30 p.m., the Port Canaveral Post Office in Port Canaveral, Fla., released the Project Mercury stamp - the first U.S. commemorative stamp issued at the same time as the event it celebrated.

The artists who created this stamp worked under a veil of secrecy. The stamp project was completed behind locked doors in case the mission did not succeed. Only slightly more than 400 people knew the secret; about half of them postal inspectors. Post offices across the country received the secret stamps but were not allowed to open them until instructed to do so.

The stamp shows the artist's rendering of Glenn's capsule orbiting the Earth and preparing to re-enter the atmosphere.

Gemini 4 was the second crewed mission of the Gemini series. The mission's objective was to see how well the astronauts and spacecraft would withstand an extended stay in space. The Gemini 4 crew -- James McDivitt and Ed White -- completed 62 orbits of the Earth during their 98-hour flight from June 3 to June 7, 1965.

Images to right: The first man on the Moon commemorative stamp. Credit: NASA

The Apollo program was commemorated by a number of postage stamps. Here's one of the most representative of them -- the first man on the moon stamp.

Pioneer 11 was the second mission to investigate Jupiter and the outer solar system. It was also the first to explore Saturn and its main rings.

Pioneer 11 used Jupiter's gravitational field to alter its trajectory radically as it passed close to Saturn, and then followed an escape trajectory from the solar system.

This stamp was issued in Mountain View, Calif., and depicts an artist's rendering of Pioneer's flyby of Jupiter and its moons.

On August 20 and September 9, 1975, NASA launched two robotic missions to Mars. Each spacecraft consisted of an orbiter and a lander.

The orbiters took pictures of the surface of Mars that were sent back to Earth and used to select the landing sites. After both landers reached the surface safely, the orbiters continued taking pictures and making scientific observations from space while the landers explored the Martian landscape.

This stamp was issued in Hampton, Va., as part of the 2nd anniversary of the first mission to land a spacecraft on another planet, and depicts the Viking craft as it orbited Mars.

Mars Pathfinder landed in the Ares Vallis region of Mars on July 4, 1997.

The Mars Pathfinder stamp features the lander and the Sojourner rover as it prepares to explore Mars. Credit: NASA/JPL

Pathfinder's deployed a rover, Sojourner, to conduct detailed analysis of the terrain surrounding the landing site. While Sojourner traveled only 0.4 inches per second, the little rover that could remained hard at work on the surface of Mars for nearly three months, far surpassing its design life.

From landing until the final data transmission on September 27, 1997, Mars Pathfinder returned 2.3 billion bits of information, including more than 16,500 images from the lander and 550 images from the rover, as well as more than 15 chemical analyses of rocks and soil and extensive data on winds and other weather factors.

Findings from the investigations carried out by scientific instruments on both the lander and the rover suggest that Mars was at one time in its past warm and wet, with water existing in its liquid state and a thicker atmosphere.

Did you know -- Remote control commands from Earth took about 10 minutes to reach Sojourner!

This stamp featured an image that was beamed back from Pathfinder showing Sojourner as it prepared to explore the Martian landscape. 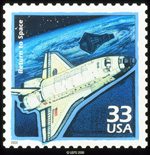 The "Return to Space" stamp was selected by the public during nationwide balloting in May 1999 as one of 15 commemorative stamps saluting the 1990s. The 1990s stamps were part of the USPS's "Celebrate The Century" program.

In 1962, aboard the Mercury Capsule "Friendship 7," John Glenn became the first American to orbit the Earth. He returned to space 36 years later at the age of 77 to help scientists investigate similarities between the effects of weightlessness and aging.

Senior USPS official Deborah Willhite unveiled the stamp, saying, "John Glenn's return voyage did more than advance our knowledge, it lifted our spirits. It also reawakened our interest in space, inspired millions young and old, and cemented John Glenn's place as one of the world's greatest astronauts."