A Century of Flight
The idea of flight germinated in the minds of two boys in the 1800s because of a toy "helicopter" that was given to them by their mother.

A little piece of wood with two twisted rubber bands to turn a propeller began a life-long adventure of research, discovery, failure and success by Orville and Wilbur Wright.

Orville Wright (1871-1948) and his brother Wilbur spent a great deal of time observing birds in flight. They noticed that birds soared into the wind and that air flowing over the curved surface of their wings created lift.

Even as children they pursued their fascination with flight, building model kites which they sold to friends. As adults, they were avid cyclists and owned a bicycle shop, but their interest in flight never wavered.

With their experience of building bicycles came the understanding of chains, sprockets, and ball bearings, all components of early engine design. Bicycle riding sparked the boys' imagination about how aircraft could be balanced and controlled.

Just like NASA, Orville and Wilbur knew that constant research was the key to success. In 1899, their first venture into flight was a small kite with a five-foot wing-span used to test their knowledge of aircraft control. By 1900, they had built their first machine to add to the kite but didn't have much success getting it off the ground.

Wilbur Wright (1867-1912) and his brother Orville developed their piloting skills by making over 1000 flights on a series of gliders at Kitty Hawk, North Carolina.

Between the years 1900 to 1902 the Wright brothers tested various unpowered aircraft to develop their knowledge of how flight control systems work. Every aspect of flight was researched, from roll, pitch and yaw, to the performance of the wing, elevator and rudder. They developed the first wind tunnel to test the aerodynamic qualities of wing models.
Technology has come a long way since the Wright brothers' early methods, but NASA engineers still use models and wind tunnels to improve the flight control of sophisticated aircraft.

By late 1903, Orville and Wilbur had worked through years of trial and error, a tremendous amount of disappointment and financial problems, but their determination was finally rewarded with success.

December 17, 1903, on a chilly day at Kitty Hawk, they achieved success with a short 12 second, 120-foot sustained flight. With this flight of the first powered heavier-than-air craft, the Wright brothers took their rightful place in history. They never imagined that their flying machine was the beginning of an unquenchable desire for man to travel farther and faster than any human being could. 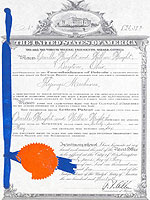 The brothers went on to develop better motors and body designs, and by 1905, had built the world's first practical airplane. This craft was capable of banking and turning and on two occasions the flight lasted half an hour.

Self-taught engineers, Wilbur and Orville Wright overcame difficult technical problems to bring to the world the first mechanical flying machine. A few years later, Orville became one of the original members of the National Advisory Council on Aeronautics (NACA) which evolved into the current NASA organization.

True to the Wright brothers' passion with flight, NASA continues to develop new and innovative ideas to improve aircraft performance, operation and technology. One hundred years later we celebrate the strength and conviction of two small boys dedicated to a common purpose.