A NASA jet pilot cut his plane's fuel consumption by nearly one-third while riding the invisible wave of energy spiraling back from a larger NASA jet. 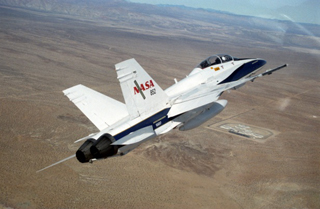 The F/A-18 experienced a 29 percent fuel savings in late June while flying in the wingtip vortex of a DC-8. Both aircraft are based at NASA's Dryden Flight Research Center, located on Edwards Air Force Base, Calif.

At left: NASA's F/A-18 in flight above the California desert.

The June 27 DC-8/F/A-18 flight was an exploratory investigation of large aircraft vortex-induced performance benefits on a fighter-type aircraft. The aircraft flew at 25,000 feet with a separation of about 200 feet nose-to-tail. The F/A-18 slowly moved in laterally to explore the vortex effects.

NASA Dryden's Autonomous Formation Flight (AFF) project in 2001 studied fuel and drag savings of a trailing F/A-18 aircraft during formation flight. The earlier experiment measured a maximum fuel savings of 18 percent for an F/A-18 flying in the vortex of another F/A-18.

The performance benefits of formation flight have been used by migratory birds flying in the traditional "V" formation to reduce the energy required to fly long distances. The vortex created by a wing generating lift creates a wave that can be ridden in a manner similar to a surfer on an ocean wave. 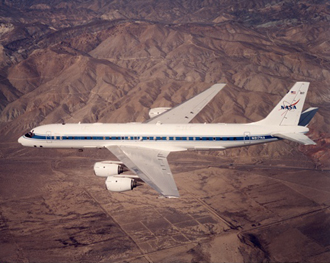 "The fuel flow improvement was better than with the AFF F/A-18-only formation," said Brent Cobleigh, project manager for the DC-8 study and chief engineer for AFF. "We were hoping for a larger number based on some predictions that the DC-8 vortex would be bigger and thus more of the trailing aircraft would be in the upwash. We are not sure whether the smaller vortex that the pilot reported is generally the case for transport aircraft or perhaps the DC-8 has a particularly small vortex," Cobleigh explained.

"Surprisingly, the overall effect of entering the vortex core was much milder than expected," said Gordon Fullerton, NASA research pilot of the trailing aircraft. "It was clear that a significant fuel flow reduction resulted when flying in the roll-away, or rolling out of the vortex, condition."

"One of the interesting things about this problem is that it is an extension of nature," Cobleigh continued. "Many birds species have figured out that formation flight benefits them, but nowhere do you see examples of large and small birds cooperating in a formation."

Data collected during the flight will be the subject of a NASA technical report.

Related information is available on the NASA Dryden Web site at: http://www.dfrc.nasa.gov/Research/AFF.