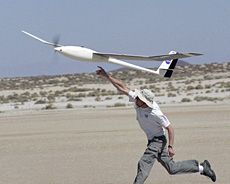 The effort was geared to discover if robotic unmanned air vehicles (UAVs) might be programmed to catch thermals and ride them, extending their flight range and saving their fuel.

For the experiment, the sailplane was modified to incorporate a small electric motor and an autopilot programmed to detect thermals or updrafts.

Following hand-launch by NASA Dryden aerospace engineer Michael Allen, pilot Tony Frackowiak flew the 14-foot-wingspan UAV to an altitude of about 1,000 feet before handing off control to the sailplane's autopilot. The software programmed into the autopilot flew the aircraft in a pre-determined pattern over Rogers Dry Lake at Edwards Air Force Base until it detected an updraft. As the aircraft rose, the engine automatically shut off and the aircraft circled to stay within the convective lift resulting from the thermal updraft.

Allen said the small UAV added 60 minutes to its endurance by soaring autonomously, using thermals that formed over the dry lakebed. Nicknamed Cloud Swift after a bird known for feeding on insects found in rising air masses, the sailplane gained an average altitude in 23 updrafts of 565 feet, and in one strong thermal ascended 2,770 feet.

"The flights demonstrated that a small UAV can mimic birds and exploit the free energy that exists in the atmosphere," Allen said. "We have been able to gather useful and unique data on updrafts and the response of the aircraft in updrafts. This will further the technology and refine the algorithms that are used."

Image left: A NASA model motorized sailplane catches a thermal during one of 17 flights to demonstrate that updrafts can extend flight time and save energy for small UAVs. (NASA photo by Carla Thomas)

Allen noted that a small, portable UAV with long-endurance capabilities could fulfill a number of surveillance roles including forest fire monitoring, traffic control and search and rescue. The technology might also have an application to flight on Mars where dust devils have been observed.