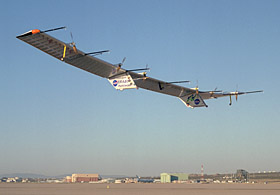 The gossamer-light Pathfinder flying wing, constructed largely of styrofoam and plastic, with small electric motors, weighs in at a very modest 700 pounds. Due to its light weight and accompanying structural flexibility, a surprise wind gust or turbulent air along the plane's flight path can prove hazardous. This makes flight planning around the weather critical for this type of aircraft and others like it.

The Pathfinder flight team was recently at NASA Dryden, located at Edwards Air Force Base, Calif., to investigate the effects of turbulence on lightweight flexible wing structures. Two very successful flights provided the team with excellent data that can be applied to future flexible-wing unmanned air vehicle (UAV) designs.

"We managed to find two days, Aug. 31 and Sept. 14, when the weather was benign enough to fly safely and still find enough turbulence that would provide meaningful data," said Casey Donohue, a Dryden contract meteorologist with Analytical Services & Materials, Inc.

Other days were regarded as no-flight days, resulting in big savings in manpower and costs. Another benefit of the precise weather forecasting by the Dryden weather team was a big enhancement in the crew rest factor. Reliance on typical forecast models, conventional aviation and public forecasters would not have produced the successful Pathfinder-Plus operations.

"It was certainly a team effort that made this project a success. The AeroVironment-NASA team worked well together and it is sad to see the project come to an end. Also, the success of the project would not have been possible without the work done by all the Dryden meteorologists, which include Chris Ashburn, Ed Teets and Jack Ehernberger, who recently retired," said Donohue.

Weather matters, and when human safety and financial investment is at stake, it matters most.

Worth noting, the Pathfinder-Plus aircraft will now be retired after 23 years of history-making solar-electric powered flight.