"As the Stomach Turns" on the KC-135
Can you imagine going to your school or office and floating in air along with your desks, chairs and pencils? Well that's what the astronauts experience when they take a flight on the KC-135 aircraft, affectionately known as the "Vomit Comet." 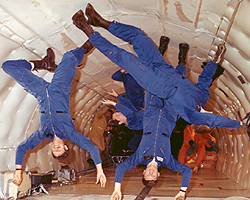 Astronauts get a unique perspective of their environment during a zero gravity flight. Medical studies and motion sickness experiments are also researched on these flights.

The NASA Reduced Gravity Program began in 1959 and the KC-135 was the perfect aircraft. The Boeing four-engine turbojet Stratotanker was originally designed for in-flight aircraft refueling and later as a 707 for commercial flights. Further modified to meet NASA's needs, the KC-135 is used to understand the role of gravity on humans and hardware in space.

During a typical mission of 2 to 3 hours the aircraft will fly 30 to 40 parabolic arcs. During each parabolic arc there are 20 to 25 seconds of "g" gravity when the astronauts will experience how it feels to be in outer space. 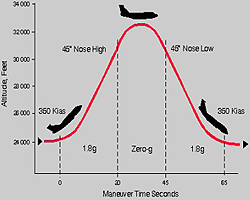 For most of us who don't know what a parabolic arc is, in the simplest terms it's a curve of equal distance to its fixed points. The diagram at left shows a flight plan for the KC-135 during typical zero-g maneuvers.

Unfortunately during weightlessness even the most seasoned astronaut may experience the stomach-turning effects. The astronauts seem to take it in stride though, not talking about who got sick and who didn't. They know it's all part of a day's work.

The KC-135 has supported about 80,000 parabolas flown in support of the Space Station and Space Shuttle programs. As a matter of fact, all the weightless scenes from the movie Apollo 13 were filmed in the KC-135. Ron Howard, Director of Apollo 13, made arrangements with NASA to use the plane for over six months.