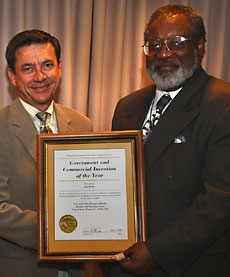 NASA engineer Jan Zysko was presented today with the agency's Commercial Invention and Government Invention for 2003 award for a life-saving device inspired by a tragic accident.

Zysko's invention is called the Personal Cabin Pressure Altitude Monitor, or CPM. It's designed to provide an early warning of oxygen deprivation to the brain, a condition known as hypoxia.

According to Zysko, during cabin de-pressurization of an airliner at a typical cruising altitude of 35,000 feet, one will only have 5 to 12 seconds of useful consciousness before becoming helpless. The euphoric feeling brought about by the early stages of hypoxia masks the dangers of oxygen starvation.

If a loss of cabin pressure goes undetected, hypoxia can be a lethal flying partner. In those conditions a person can feel like they're functioning normally while actually their mental capacity quickly diminishes. Soon after, physical movement is impossible, followed by unconsciousness and possible loss of life.

"If this technology can help avoid even one incident or accident, it will have been worth all the effort and resources put forth," said Zysko, an applied research and development engineer based at NASA's Kennedy Space Center.

Zysko was inspired to develop sensors to monitor cabin pressure and altitude after the October 1999 aircraft accident which took the lives of golfer Payne Stewart and his colleagues. Zysko built a crude prototype over the Christmas holidays that year and brought it in to work to find out if management would be interested in further development.

When his team was given $100,000 in funding, development started in earnest. In only six months, the device went from a prototype to a fully functioning unit.

In the meantime, the National Transportation Safety Board (NTSB) heard about the CPM while investigating the Stewart incident and invited Zysko to brief its accident investigation team. This included medical professionals who were very aware of the dramatic effects hypoxia has on a human body. 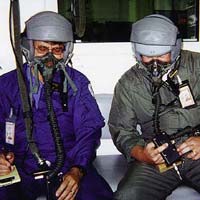 It was evident that the flying public and pilots needed to know more about the effects of hypoxia. Zysko searched the NTSB aircraft archives for cabin-pressure failure incidents and found there were many more than most people knew about.

He was even more motivated to continue the project after the Oshkosh Air Show in Wisconsin, where the CPM was on display. There Zysko received personal testimonials by pilots about hypoxia-related symptoms they had experienced and how lucky they were to have lived to talk about it.

Today, the CPM is available to everyone and there are many ways the device can be applied. Skydivers, balloonists, mountain climbers, meteorologists, people working in altitude chambers and underwater habitats, and many others can use the CPM to be safer in their environment.

But there's more in store for Zysko's invention. He's even received an invitation to discuss the CPM technology for the International Space Station crew members.

So for Jan Zysko, even the sky isn't the limit to his invention's success.