Helios Crash Probed
As much as 75 percent, by weight, of the Helios Prototype solar electric airplane that crashed into the Pacific Ocean June 26 has been recovered from the waters several miles west of the Hawaiian island of Kauai. 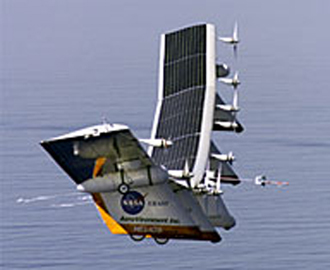 The Helios Prototype is part of a NASA Dryden Flight Research Center project to develop unmanned aerial vehicle (UAV) technologies to enable UAVs to perform a variety of long-duration missions including environmental monitoring and telecommunications relay services. Helios was built and operated by AeroVironment, Inc. of Monrovia, Calif.

Researchers said the 247-ft. remotely piloted flying wing aircraft, operating on solar cell power, was at about 3,000 feet in restricted Navy test range airspace when it experienced control difficulties that resulted in severe oscillations before Helios sustained some structural damage and went down. AeroVironment's solar aircraft team has previously conducted nine successful flights with the Helios Prototype and more than 40 on predecessor solar aircraft. NASA has convened a mishap investigation board on Kauai to determine the cause of the crash.

Among debris recovered with the help of the U.S. Navy's Pacific Missile Range Facility and the Niihau Ranch were the two hydrogen fuel tanks carried by Helios in a quest to validate fuel cell electric power technology for airborne applications. Helios team members say none of the recovered pieces will be reusable because of damage and salt-water contamination. They say the crash does not pose environmental hazards. Formal recovery efforts ended on June 28, but debris patrols of the beaches on the west side of Kauai continue.