Around the World in 80 Hours 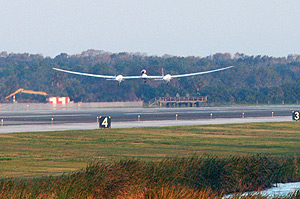 Legendary pilot Steve Fossett is attempting to smash a 16-year-old flying record in a little more than 80 hours. The seasoned adventurer and veteran aviator, along with Virgin Atlantic's GlobalFlyer aircraft, "launched" from Kennedy Space Center in Florida early on Feb. 8 in an effort to set a new world mark for the longest nonstop flight of any type of aircraft.

Virgin Atlantic's chairman, Sir Richard Branson, expressed his excitement about the flight and its "launching" point. "I am absolutely delighted to be here at the Kennedy Space Center," said Branson. "What a place and what history it's made."

Fossett is an adventurer with a formidable list of accomplishments, having set 109 records piloting various craft such as balloons, sailboats and airplanes. When asked why he's attempting such an arduous and risky flight, Fossett stated it's a matter of personal satisfaction. "I enjoy it," he said. "I've never lost interest in the feeling of getting to the top of a mountain or achieving a world record."

Fossett and GlobalFlyer first gained fame in March 2005 when together they completed the first solo, nonstop circumnavigation of the Earth. The total trip distance was 22,928 miles.

Now airborne, Fossett intends to fly the red-and-white, hyper fuel-efficient aircraft once around the globe before continuing on to land at Kent International Airport in England. The entire trip is charted to extend roughly 26,000 miles. The flight is projected to last approximately 80 hours, taking GlobalFlyer across areas like North Africa, China and the Hawaiian Islands. 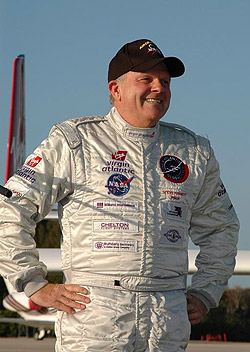 Fossett aims to break two existing world records held by distinctly different aircraft. The world distance record for an airplane currently rests at 24,987 miles, set by Dick Rutan and Jeanna Yeager aboard Voyager in 1986. As impressive as the distance is, the overall record for any type of aircraft actually belongs to a high-altitude balloon. In 1999, the Breitling Orbiter balloon floated into the record books with a trip spanning 25,361 miles. Fossett's flight would eclipse both records by hundreds of miles.

A Move for the Future
On Jan. 12, Fossett repositioned GlobalFlyer from its home base in Salina, Kans., to Kennedy Space Center. The move poised Fossett to take advantage of Kennedy's world class facilities and a new NASA initiative that permits alternative uses for the center's unusually long space shuttle runway. At 15,000 feet, the airstrip is one of the longest in the United States and offers plenty of length for the heavily fueled aircraft to take off.

"About six or seven months ago, Kennedy Space Center embarked on a venture to explore the potential for utilizing the Shuttle Landing Facility for missions other than NASA's own," said Kennedy Spaceport Development Manager Jim Ball. "We were extremely pleased that we had some terrific responses, and among them was the expression of interest from Virgin Atlantic on bringing GlobalFlyer here."

Built for the Long Haul
GlobalFlyer's svelte design belies its thoroughbred nature. The trim wings of the gossamer-like GlobalFlyer stretch 114 feet, while its sleek, trimaran-shaped body spans only 44 feet. Although a heavy contender to break the record, the aircraft barely tips the scales. GlobalFlyer weighs a relatively wispy 3,460 pounds due to its exclusive use of graphite/epoxy materials. The cutting-edge design means the aircraft only requires a single, jet engine to power it to a cruising altitude of 45,000 feet at speeds in excess of 285 miles per hour.

Whether or not Fossett and GlobalFlyer will reach their lofty goal is anyone's guess. Whatever the result, Branson sees Fossett's attempt as a demonstration of one of aviation's - and life's - most thrilling realities: "He's showing that records are made to be broken, and it's man's nature to strive to do just that."