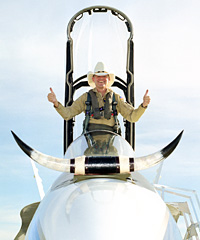 "I know a lot of the people who are members of the Walk of Honor already," he said. "These are people I have flown with like Fitz Fulton, Bill Dana, Tom McMurtry, Don Mallick and people who are some of my heroes-Scott Crossfield, Jimmy Doolittle, folks like that. It's amazing that someone would think my accomplishments would allow me to be included with them."

Schneider, the 19th NASA pilot to receive this recognition, called his induction a "huge honor," easily the biggest in his life.

While at NASA's Dryden Flight Research Center at Edwards Air Force Base, Calif., Schneider piloted five first flights and flew many modified planes used for research such as the SR-71, F-15B, F-18 High-Alpha Research Vehicle (HARV), F-8, B-52B and a Learjet. Overall, he has flown more than 87 different aircraft types.

Fast Eddie flew NASA's thrust-vectoring F-18 HARV aircraft at extreme nose-up attitudes of up to 70 degrees angle-of-attack. The F-18 HARV demonstrated a combination of technologies that provided carefree handling of a fighter aircraft in a part of the flight regime that was otherwise very dangerous. Regarding speed, Fast Eddie was indeed fast, past Mach 3 in NASA's SR-71.

More photos of Schneider can be found at: http://www.dfrc.nasa.gov/Gallery/Photo/Pilots/index.html