What is a Sounding Rocket?
What goes up must come down. But during the 30 minutes NASA's sounding rockets are airborne researchers have more than enough time to collect important scientific data and conduct engineering tests. 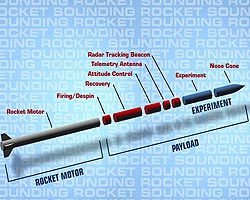 Sounding rockets take their name from the nautical term "to sound," which means to take measurements. Since 1959, NASA-sponsored space and earth science research has used sounding rockets to test instruments used on satellites and spacecraft and to provide information about the Sun, stars, galaxies and Earth's atmosphere and radiation.

Image right: NASA currently uses 15 different types of sounding rockets which have configurations similar to this one. They come in a variety of sizes ranging from the the single-stage Super Arcas which stands at 7 feet to the largest, the four-stage Black Brant XII which stands 65 feet tall. Click on image for larger view. Credit: NASA

The development of many NASA missions like the Compton Gamma Ray Observatory (CGRO) and TRACE satellite has been based on sounding rocket investigations.

This type of testing is unique because it's simple, cost-effective and time efficient. The experiments for the payload can be developed in about six months. The rockets are divided into two parts: the payload and a solid-fueled rocket motor. Many of the motors used are surplus military motors.

After the launch, as the rocket motor uses its fuel, it separates from the payload and falls back to Earth. Meanwhile, the payload continues into space and begins conducting the experiment.

In most cases, after the payload has re-entered the atmosphere, it is brought gently down to Earth by way of a parachute and is then retrieved. By recovering parts of the payload, it can be refurbished and flown again, resulting in tremendous savings.

Scientific payloads are carried to altitudes from 30 miles to more than 800 miles. And although the overall time in space is short (typically 5 to 20 minutes), the experiment is perfectly positioned to carry out its mission successfully.

Data is often collected and returned to Earth by telemetry links, which transfer the data from the payload directly to researchers on the ground. This is similar to how you pick up tunes on a radio. 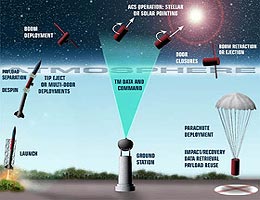 Image left: The flight profile of a sounding rocket in its parabolic trajectory -- it goes up and comes back down. In this short flight time and lower altitude regions of space that are too low to be sampled by satellites are accessible. Click on image for larger view. Credit: NASA

Because of its low cost and short lead time, sounding rocket payload testing is invaluable to students conducting graduate work in scientific fields. High school students can fly experiments on a sounding rocket through the NASA Student Involvement Program. Through the program, students work with NASA to develop the experiment and participate in the launch.

Also, scientists are able to accomplish their research at a specific time and place, because the sounding rockets can be launched from temporary sites all over the world, including aircraft carriers.

NASA's Wallops Flight Facility in Virginia is host to about 25 sounding rocket launches annually and is proud of its 98 percent launch rate. The Sounding Rocket Program has assisted the nation's space program by providing important technical, scientific and educational contributions.