What's a Scramjet?
One thing has always been true about rockets: The farther and faster you want to go, the bigger your rocket needs to be.

Why? Rockets combine a liquid fuel with liquid oxygen to create thrust. Take away the need for liquid oxygen and your spacecraft can be smaller or carry more payload.

That's the idea behind a different propulsion system called "scramjet," or Supersonic Combustion Ramjet: The oxygen needed by the engine to combust is taken from the atmosphere passing through the vehicle, instead of from a tank onboard. The craft becomes smaller, lighter and faster. 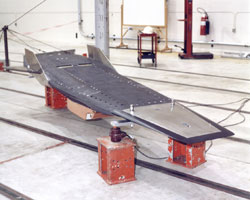 How fast? Researchers predict scramjet speeds could reach 15 times the speed of sound. An 18-hour trip to Tokyo from New York City becomes a 2-hour flight.

A look at one of NASA's developmental scramjets, the X-43A, undergoing ground testing.

On August 16, 2002, the University of Queensland in Australia completed the first successful flight of a scramjet vehicle, reaching speeds of Mach 7, or seven times the speed of sound.

NASA's Hyper-X program is working to develop scramjets into a practical technology. The X-43A, a 12-foot long scramjet-powered research vehicle, was constructed by MicroCraft, Inc., now known as Alliant Techsystems, Inc. The company fabricated three X-43A aircraft for NASA, to be flown aboard modified Pegasus rockets developed by the Orbital Sciences Corporation. The Pegasus is dropped by a B-52 aircraft and launched to an altitude of over 90,000 feet, where the X-43A is released and flown under its own power. 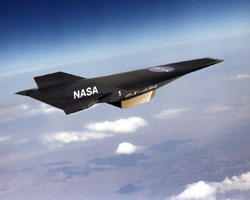 Each of the three vehicles appear identical but have slightly different oxygen intake designs, based on what speed their test flights are planned to accomplish. The first test flight of the X-43A, which took place on June 2, 2001, failed due to a stabilization problem with the booster rocket's directional fins.

An artist's conception of the X-43A in flight. The vehicle will be tested at speeds up to Mach 10.

The Hyper-X program is a joint project between the Langley Research Center in Hampton, Va. and Dryden Flight Research Center in Edwards, Calif. The next developmental flight of this system is scheduled for no earlier than February 21, 2004.