Icing: A Chilling Subject
Ice. It's great to cool beverages with and skate on, but it's often hazardous to aircraft.

That's why NASA's Glenn Research Center (GRC) in Cleveland built what was once the largest Icing Research Tunnel (IRT) in the world in the mid-1940s. NASA realized the need to improve aircraft safety by increasing technical and in-flight awareness about icing conditions. 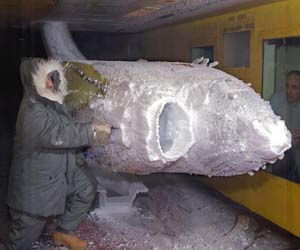 One of Glenn's busiest facilities, the 9 foot wide by 6 foot tall icing tunnel can generate airspeeds from 50 to over 400 miles per hour and temperatures as low as minus 40 degrees Fahrenheit.

Image to right: The Icing Research Tunnel is used to simulate the formation of ice on aircraft surfaces during flight. Cold water is sprayed into the tunnel and freezes on the test model. Credit: NASA/Tom Jares

Natural icing conditions are simulated by subjecting the models to supercooled water droplets of varying sizes and water content.

Planes have had ice protection systems in place since the 1930s, but aircraft technology, size and distance traveled have changed significantly. And so has Glenn's IRT. It has been updated to accommodate the current gas turbine-powered aircraft, electronic data gathering and computerized controls.

An aircraft's exterior surface, such as the upper wing and body, are the most vulnerable areas for ice formation while awaiting takeoff. Glenn's research team has played a role in testing and certifying methods, like anti-icing fluids, to prevent ice build-up on aircraft while still on the ground.

But icing on aircraft in flight could be just as harmful as it is on the ground. When flying through clouds, ice tends to form on the most sensitive areas like the leading edges of the wing and tail, according to Tom Ratvasky, one of Glenn's leading icing flight researchers.

Glenn uses, as part of its aerial research facility, a DeHavilland DHC-6 Twin Otter aircraft, which is considered a "flying laboratory." The Twin Otter turbo prop has seen many years of service. Having undergone extensive modification, the lab in the sky has helped researchers gain information on icing physics studies, protection systems and remote-sensing technologies. 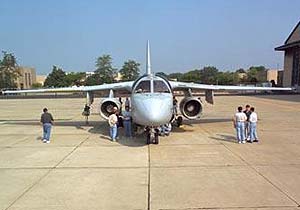 The in-flight icing research activities will soon be aided by a new addition to Glenn. A former Navy S-3 Viking aircraft was recently transferred to NASA and will undergo modifications to provide a state-of-the-art flying laboratory by 2006.

With the increased speed, range and electrical power generation that the S-3 offers, the icing flight research that NASA conducts will be more geared to today's air transportation system.

They are working to improve the ever-present icing conditions that affect every craft that leaves the Earth.