'Big Fish' Carries NASA's Loads
As the International Space Station celebrates five years in orbit, one aircraft on Earth continues to provide the capability to bring Station components to their launch site. 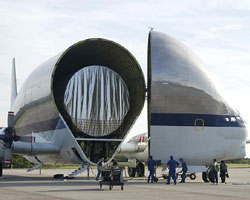 The 377SGT-F, or Super Guppy, is the only aircraft able to support the sizable and delicate structures of the International Space Station. The next fastest route for components coming from manufacturing sites in the west to Kennedy Space Center includes a trip by barge through the Panama Canal.

The 377SGT-F delivers components of the S-6 truss to Kennedy Space Center for its launch to the International Space Station.

The original Guppy aircraft, designed by Aero Spacelines, began cutting months off space hardware shipments in the 1960s. Its design rose out of the demand for a quicker way to send Saturn V rocket stages from California to Florida.

Today's Super Guppy is an improvement on both the size and the range of its predecessor. Fully loaded, it cruises at 25,000 feet to a range of more than 500 miles. 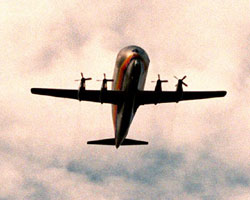 The unique shape of the Super Guppy makes it suited for payloads too bulky for traditional cargo planes. The nose of the aircraft opens to 110 degrees, allowing payloads to be easily loaded and unloaded into the massive cargo bay. Electric winches built into the compartment slide up to 26 tons of payload into the aircraft and hydraulic pins secure the cargo for flight.

The Super Guppy's recent cargo includes the S-5 and S-6 truss segments, which are key parts of the Space Station's backbone.