Cleaner Skies
What can be worse than smelling the exhaust fumes from planes or cars? The damaging effect those emissions have on our atmosphere. An aircraft can produce up to 4 percent of the global carbon dioxide emissions each year!

NASA's Glenn Research Center in Cleveland, Ohio is experimenting with more fuel-efficient engines, because the less fuel that is used, the fewer harmful pollutants will contaminate the air we breathe.

Today's jet engine is powered by fuel that is primarily kerosene, a fossil fuel created in the ground from decaying animals and plants over thousands of years. 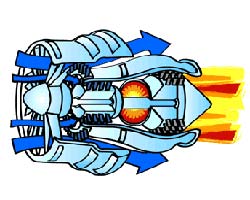 Similar to the automobile's internal combustion engine, a jet engine mixes a fuel and an oxidizer to burn (or combust). The gasses from the combustion are vented at high speed through a small opening, which provides thrust.

Image to left: Thrust is the force propelling the airplane forward. Issac Newton's Third Law of Motion says that every action has an equal and opposite reaction. That means that the backward force of the jet engine pushes the plane forward. Jet Engines 101. Image credit: NASA

The hotter the inside temperature of the engine, the more efficiently fuel is burned. Engines that run hotter and cleaner reduce emissions and burn half the amount of fuel used today.

Unfortunately, these higher temperatures increase the NOx emissions that harm the ozone. This results in additional emissions that contribute to air pollution and the warming of our climate (the greenhouse effect).

On the other hand, incomplete combustion occurs when an aircraft idles, taxis on the ground and powers down for descent, causing the fuel to burn inefficiently.

The Glenn Research Center team is experimenting with new, lighter materials for engines because less weight means less fuel is consumed. In fact, improvements in aircraft engine design have already resulted in a 70 percent decrease in emissions, but more needs to be done to reduce the unburned hydrocarbons.

NASA engineers are using computer modeling to study how high temperatures and increased emissions are related, and are working to lessen these emissions at their source. Already, new engines with low-emission combustors have been in use since 2002. 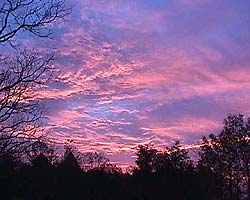 Researchers are also looking to develop engines that don't burn hydrocarbon fuels at all. Aircraft using a hydrogen fuel rather than a hydrocarbon fuel could eliminate the carbon dioxide emissions altogether.

There are no easy answers to this complex problem. In the meantime, NASA's Aura satellite, that is set to launch in July, will keep an eye on the ozone layer and climate to let us know how we're doing.