In Days of Old, Test Pilots Were Bold 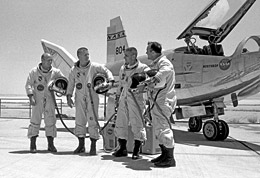 Sixty years ago NASA's predecessor, the National Advisory Committee on Aeronautics, or NACA, oversaw America's technical rise to aeronautical pre-eminence in the world.

These were the heady days of early supersonic flight, when bold test pilots mounted new, untrustworthy jet and rocket-powered steeds to challenge the mysterious frontier of flight faster than the speed of sound.

This era of the first jet and rocket-powered planes was a time of risk; NACA and U.S. Air Force test pilots put their lives on the line every time they strapped themselves into these vehicles, and some of them didn't come back. More than a few of the survivors found themselves tumbling out of control through the sky before regaining control of their experimental craft. These highly-trained, professional test/research pilots were willing to take risks, even risking their lives, in order to advance the science of flight.

World War II fighter pilots had discovered control problems in high-speed dives due to what was later found to be supersonic shockwaves building over their aircraft. This was the so-called sound barrier, an invisible speed wall that could not be penetrated by the aircraft of the day. After the war, the Air Force and the NACA tackled the sound barrier as new aircraft held promise to jet past the speed limitations of propeller-driven planes. As a result, the late 1940s through the 1960s became a golden era of flight test, all centered at what is now Edwards AFB in Southern California's high desert.

The Army Air Corps had moved out here in the late 1930s, calling the place Muroc Army Airfield. At first it was simply a bombing range, but development of America's first jet, the Bell P-59, inaugurated Muroc in 1942 as the country's flight test mecca.

The NACA established a facility at Muroc alongside the Air Force in 1946, called the NACA Muroc Flight Test Unit. Jointly, the era of supersonic flight began soon after, when Air Force test pilot Chuck Yeager flew the rocket-powered X-1 into the history books with the world's first supersonic flight in 1947.

This NACA outpost on the frontier of flight, now called the NASA Dryden Flight Research Center, participated in the birth and growth of the X-plane fleet, starting with the X-1. Perhaps the most famous of the X-planes was the remarkable X-15 rocket plane, which helped open the door to manned space flight in the late 1950s and 1960s. The NACA became NASA during this time as the space age began, and Dryden's role evolved along with it.

As NASA reached for the moon in the 1960's, NASA Dryden test pilots climbed aboard spidery, jet-lifted Lunar Landing Research Vehicles, shaking them down before handing them over as flying simulators to Apollo astronauts.

As water splashdowns of space capsules continued, the possibility of spacecraft landing on dry ground rather than water resulted in NASA's lifting body program, in which wingless flight was proven by hardy-souled NASA pilots. 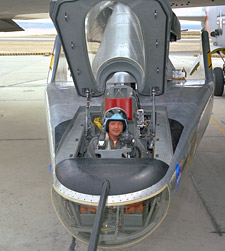 Boldness continued to be a prime ingredient for test pilots made of the right stuff. Danger constantly lurked, as attested by the careening crash of the M2-F2 lifting body in 1967. Launched from NASA's massive B-52B mother ship, these wingless wonders rocketed through the skies and made super-fast landings on Rogers Dry Lake at Edwards, graduating to precise concrete runway landings by the X-24B lifting body that primed the way for the Space Shuttle.

When it came to launch the never-before-flown space shuttle from the back of a 747, nerves of steel were required yet again. When the Enterprise lifted off a 747 in 1977, no one knew for sure if it would clear the carrier aircraft's tail. Two pilots aboard the fledgling spaceship and two on the 747 put their lives on the line to find out.

In the meantime, numerous high-performance research aircraft, as well as other specialized planes, were flown to the limits by NASA Dryden pilots through the 1970s, 80s and 90s. Even with the emergence of unmanned aircraft, skill and determination by resolute engineers continued, resulting in air-breathing flight to Mach 10 by the scramjet-powered X-43A in late 2004.

Though many aeronautics and space frontiers have been conquered, others await. Boldness and determination remain essential ingredients in NASA's recipe for success.